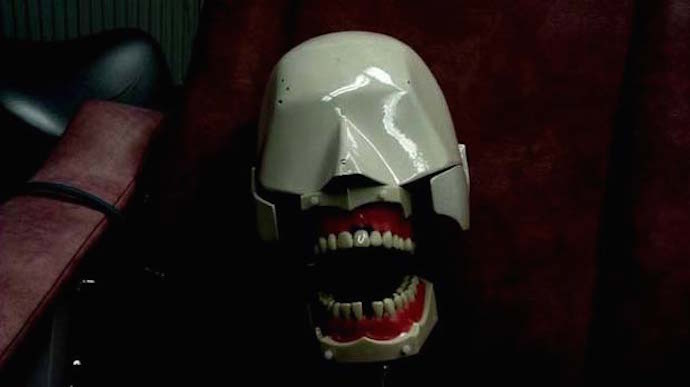 Translated from the Korean by Jiyoon Lee, Don Mee Choi, and Johannes Göransson

I’m modeling here at the Annapurna Cabin, making use of my part-time job experience from my college days. Plee-z. An Italian man wearing a pelt hat approaches me and pleads with me to pose for him, and he persuades me quickly in just a few words with a strong accent. Acting all coy, I comb my long hair back (“Is she crying? / She’s not crying, is she? This can’t be her first time!” In a one-hundred-liter sample, there are one million sperms. The mysophobic nature of these numbers explains the situation. I didn’t shake hands with him. Opening my hand only a little, I just went, “Bye.” Oh, don’t get me wrong. Crying is just a habit of mine whenever I say goodbye.). The painter fixes his hat and closes just one eye. He points a yellow pencil, his sword, at me. Starting with my nose, he cuts me clean in half perpendicularly. He stabs my neck, then he cuts me exquisitely at multiple angles. The hanging basket shakes up the entire terrace, making whirring noises, and falls to the ground. In the basket, there’s a withered Chain of Hearts. The pale-looking painter grabs only the most disgusting remains of the mess scattered all over the place, and goes inside with his easel at his side. (What the hell is this? My brother wasn’t kidding. It was the countryside restaurant, the one I stumbled across during my sketch outings where I ordered coffee and garlic bread. The garlic bread literally had just three slices of garlic on it. No jam or spread to keep the garlic on the bread. I glared at the painter through the hole I had made in the bread by poking with my finger through. He was completely hollow inside the frame. The owner of the restaurant flinched at the sight as he squeezed a ketchup bottle.) I know, I can’t seem to piece together all of my impressions. The painter comes over anxiously and twists my shoulder to make me pose. Sorry. He opens my mouth with his hairy fingers and massages my face tenderly. My head hardens like plaster. Good, stop. Like a drawstring skirt, I struggle not to let my so-called smile sag like an awkward crease. (You’re not crying are you? When are you coming? You’re not going alone, are you? Can you go alone? Impossible! Like an outdated joke, the painter repeated, Can it be, can it be? And I took off, riding a white horse across the snowy Himalayan mountains. I passed the Palace of Summer; I defeated the Yaks; and I saw Re, the old city of the future. Don’t misunderstand me—that’s not our destination.)  He glares at the unfinished drawing. The croquis flinches and spits out a woman. It’s a woman I saw a long time ago. She looks around as if for the first time. The woman, wide-eyed, faintly outlined, can’t be observed or understood by me. The vanished women always reappear as models. The woman runs away when she sees me. In the drawing classroom, she only moves to sit in the exotic-looking armchair after kicking over the long wooden bench that chafed her butt, as she covers her pink areolae with her long hair. Shoving the nearly burnt toast into his mouth, the artist picks up his bag. It rains like this every night in Annapurna because of its terrain. You can’t go, it’s raining too hard. The restaurant owner with bluish eyes stutters and repeats himself. I never ask and never call out for anybody. I watch the rain that collapses like the frame of a stolen painting.

Kim Yi-deum has earned degrees in German and Korean Literatures. She teaches at Gyeongsang National University. She has written five books of poetry – including Star-Shaped Stain, Cheer up, Femme Fatale, Inexpressible Love, Song of Berlin, Dahlem, Hysteria – and one novel, Blood Sisters. Her writing has been used in scripts for a play (The metamorphosis, 2014) and independent film (After school, 2015). She has received numerous literary awards for her work, including Poetry and the World Literary Award, Kim Daljin Changwon Literary Award, Outstanding Poem of the Year Award, and the 22th Century Prize of Literature. She read at the Stockholm International Poetry Festival in 2014 and Biennale Internationale des Poètes en Val-de-Marne 2015. Her radio show, “Poems Selected by Kim Yi-deum,” ran for about a year at Jinju KBS. Now she is working as an editorial staff of several organizations such as Society of Korean Poets, the magazine Poetry&Expression and the magazine Poem Poem.

Jiyoon Lee was born in South Korea, but earned her MFA at the University of Notre Dame, and currently lives in Texas. She has two chapbooks: IMMA from Radioactive Moat Press and Funsize/Bitesize from Birds of Lace Press. Her first book Foreigner’s Folly was published by Coconut Books.

Don Mee Choi is the author of The Morning News Is Exciting! (Action Books) and the upcoming Hardly War (Wave Books). She has translated several volumes of Korean poetry, including Sorrowtoothpaste Mirrorcream and the forthcoming Poor Love Machine, both by Kim Hyesoon (from Action Books).

Johannes Göransson is the author of six books of poetry, including most recently The Sugar Book. He has also translated Swedish-language poets like Aase Berg and Henry Parland. He edits Action Books and teaches at the University of Notre Dame.