AN EXPERIMENT IN READING: THE ODES TO TL61P of KESTON SUTHERLAND 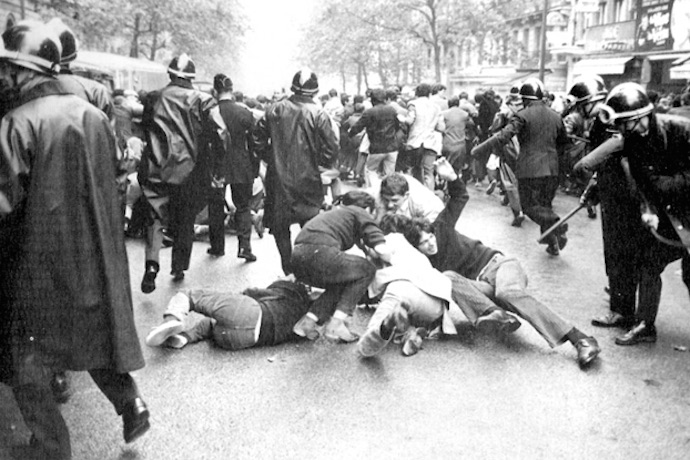 Like putting your ear by the mouth of someone sloppily eating gristle, caramel, potato chips, slurping aggressively a large bowl of milk, the thing repealed, an advanced directive that recalls gestural peddling on the compass points where archeological science-fiction commodified as to proximity with respect to delirium’s dizzying sploogeness, an antic feather, shallow technology, dispersed recklessly upon a stunned dirt visage, all of it congealed on the skein that a pseudo-pornography spins from the computer in the student lounge. It has wings, in other words, valences, orchestral democracies; it has operatic confusions. Is that a reference to Bataille? Beckett? Is that a pencil-skirt hiked above cherry-like amplitudes that moan and nastily request penetrating colonies be lent a piston post-Marxian flamboyance.

The world we live in is safe haven to all commodity, whereas the human has its place elsewhere. While pissing in the kitchen sink, I see the harvest moon.

Poetry pleads, intones. And here are the majestic, slovenly, irrigated, relentless odes of TL61P. Look it up. Google it. I won’t tell you what it means. Meaning is essential. Meaning is indispensable. Meaning is a moral imperative, like mustard, a rupture in chaos, a flue opened for safety and for air quiddity’s sake. Meaning is moaning is mooning is more ring. Meaning moors, fastens, attaches, fixes, anchors. No question serves to set the thing down unless illegitimate as genealogy.

And so that as our art is increasingly sold, and love is, and there are many more sellers, many of them good sellers, its use value as what the Nigerians call a supernumerary proportion of its total combined value including its exchange goes into improbable dramatic decline, like Chekov. Do not sell your art, for the instant you write that initial word in a notebook newly purchased is the moment it begins to lose its value, unless such time as it gains value by growing, like grass out of a skull, into the purpose of a fetish object, a dildo retired from its nights as banal hump flagon.

Utility is not a thing of air. Thus the poem isn’t useful in the same way that a hammer is: that is, by means of its material efficacy in building a house, setting down paving stones, erecting a monument for ancestor worship, an aid to grooming horses or training competitive show dogs.

Consider: A thing can be a use value, without having value. This is the case whenever its utility to man is not due to labour. Such are air, virgin soil, natural meadows, &c. A thing can be useful, and the product of human labour, without being a commodity. The poem exists in the air, or on the page which is a form of air, a mode of existing in the air. A book of poetry is useful only in the sense that rubble has a use value: the poem is air vandalized by fancy by delight by imagination.

Appointments assume appearance. It has no relevance to determining a use value. Tomorrow, for example, I visit the cancer clinic to talk further about my treatment. On Wednesday or Thursday, I forget which,

morning I visit the dentist where I shall confess a concern regarding a sensitivity in my upper molar. I have an inkling as to the whereabouts for the operator’s manual for my HP LaserJet Pro M402n Monochrome Laser Printer. Only an inkling: upstairs, in my study, in the shallow drawer of the small table upon which the printer sits. Retrieval roar aghast in rutted rain-soaked random in pineal order to rue iridium’s renal rage. Which is one way to use it but not exclusively abuse, so heavy-footed is its shank critique. Let me go on.

This seems relevant: It was sadly something of a tradition for [Gilbert] White’s early editors to update his observations, answer all his queries, and use his text as a springboard for their own theories and dissertations. Is that what’s happening here? There shall be no end of questioning; after all, as Artaud wrote: All literature is pigshit.

The TL61P is the code for a particular Hotpoint dryer. In Leominster, Herefordshire there was just such a machine for sale several days ago: Hotpoint TL61P tumble dryer. White. Good working order. Just bought a newer condenser model so this one is surplus to requirements. This is a normal vented dryer i.e. it has a hose to connect to the outside world. It has a 5kg capacity. An advertisement appropriate for the 18th century. On November 23, 2015, the Guardian reported that Hotpoint had issued a recall for certain of their dryers because of an increased fire risk. Check your machine’s serial numbers and call the Hotpoint service number to find out if your dryer needs repair. In the meantime, visit a laundromat or line dry your clothes. Sutherland tells us: I stupidly broke the catch. I slammed the door and the catch encased in the door is now broken. The catch inside the rim is fine and if I lodge a spoon in there it continues to function. The careless act, in this case, becomes the occasion for the creation of art. And the problems of poetry are essentially the problems of prayer; for it is prayer that attempts to redeem the careless act through transcendent intervention.

The ode celebrates, exalts, and is believed to have been performed to musical accompaniment. Concerning types, there are three: the Pindaric ode, named after Pindar, the Horatian ode, named after Horace, and the irregular ode, barely named at all. The Odes of TL61P are most certainly of the irregular type. though the term used here might simply be a post-modernist irony. Formally, what we have are dense prose poems that occasionally break out into verse forms – forms that often employ regular meter and rhyme. On those occasions, they love themselves, crawling out from thick underbrush into the clearing where they breathe deeply beneath an infinity of pellucid sky.

The tyrant rules not by fiat but by tantrum; politics is ally to revulsion.

Thematically, oceans span and are spanned. The lubricious seldom surfaces, while the political ranges madly. The bourgeois aesthetic of clarity settles down to the bottom. If meaning isn’t obvious the brain gets mean and envious. Making art in an ecology where material controls the thermostat is conflict. The very existence of a minimum wage is very existent cage for my mum. The word minimum neatly imprisons mum. Capitalism, the system for profit we all die under is the infinite multiplication of values: the last resistance is sterility, but not the least.

A Situational sloganeering appears to encourage restraint in production. (Remember the Art Strike of the early 1990s.) So that the single instance of all caps articulates this history: MAKE LESS, NOT MORE. Which is analogous to a gag order raised to the level of ars poetica: the minimalist can just as frequently be condemned by nature as by practice. Not all poetry needs a voice.

Whereas therefore what hitherto has been made into an ideological flange somehow brims. You haven’t really lived unless, while on a flight from Orlando to Dallas/Forth Worth Texas, you shit in your pants three times. Humiliation can be vast like the seas.

Romanticism, love, an emotional overflow, what have you:

[…] I sort through the boxes,
my first poems are there, the
drawings I made at school are
and my toys are, lead prodigies and barbarians,
Paints for them, tapes of my rock band
some vinyl of Tchaikovsky and Bach, the present
photographs of my first sexual lover
whose face is staring with intent euphoria
and despairing tenderness at the face I
was, the eyes I shone in then, the light […]

A pitch of Renaissance intensity, the eyes that gaze, their penetrant force, beams like arrows. Perhaps the 1812 Overture? The Toccata and Fugue in D Minor? The lyric as ha-ha, a long view uninterrupted by protruding stone impediments. One almost feels sorry for prose when placed beside such sublimities, so powerful is poetry’s conventional arraignments. You see through love, and that deludes your sight.

I made a list: sex/sexuality; commodification of fucking everything; power structures in society; secrecy; police actions (brutality) & management (overtime pay); business loathing; outrageousness as a form of catastrophe; sexual deviations, permutations and Hellenism; violence in society; poetry’s essential whatever; the donation or dispensing of all art in order to save art from death by commodification. Some items have been touched upon, some abandoned, some remain unformed, some glimpsed only in passing – a heartbreakingly beautiful girl seen from a train window – some others outright rejected as misrepresentations or cloud-like shapes that happened inexplicably in the mental sphere. The sum of all disorders is the law of paradise. I fear I have a disturbance that prevents me from comprehending texts with clarity: The underground is all in your head.

Of the four odes in Odes to TLP16, it is the fourth ode, fourth section, which offered me the greatest pleasure. Fuck me. It was delightful. Fuck me. In parts, it sang. Fuck me. I did drink the sweet ambrosia. Fuck me. I stood beneath the harvest moon in sweet, sweet anguish. Fuck me. And did whisper to angels that beheld. Fuck me. How shall I count the ways. Fuck me. There resides the lamp of love. Fuck me. The very form of beauty in all its instances. Fuck me. If I would such heavenly breath be given. Fuck me. Love is what ignites an effort across reason. Love sets afloat the dreamer and his dream, the lyricist and his lyric. You become radical when the only thing you can do to rouse the sleeping public is something truly catastrophic. Catastrophe is the thinking man’s prosthesis. His belief is that in the face of grand projects to change the world, ordinary life is indispensable; on that basis the poet is his natural ally.

The poet bears the prosthesis of tradition. She adheres within the whirlwind. The pine lectern on the open air stage where a meaningless lecture is delivered. The administration of modernism is to be difficult on purpose, to love the confusion of others as much as your own. Revelation or feather in a forest of hair?

Along the strand bell song.

and the voice saying: I’m far from knowing what to do about any of this, or after it; but so long as my blood is attached to the world I live for by its motion: I create this pledge in utter solemnity, I will never deny it; but burst to make it love for everyone shower my heart. Modernist, and post-modernist, irony’s apogees, lay down your weapons before the power that animates poetry’s eternal body: all things that are, are love.

NOTE: All words in italics, and all lines of poetry, are taken from Keston Sutherland’s THE ODES TO TLP16 (Enitharmon, 2015). The advertisement for the Hotpoint dryer was taken from a British online site. I would like to thank the anonymous author of that advert. This essay has not been proofread, on the assumption that any attempt to improve would result only in a diminishment.