Amidst So Much Meadow: A Review of James McCorkle’s The Subtle Bodies 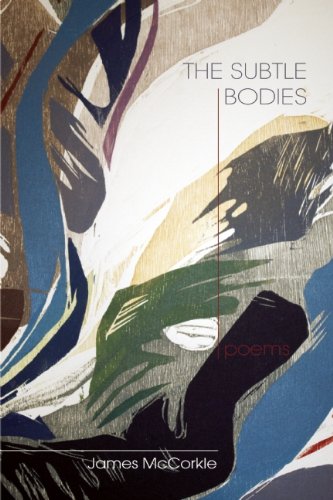 What if you and I were in a meadow. We knew each other well. Well enough that looking at something in the meadow, we could feel the alive part of it together. Jorie Graham was at one end of the meadow. Larry Levis at the other. And the meadow is alive, a living alive in every molecule and cell wall and living body present. That’s why we’re there together.

There is a great potential for poetry alive in the meadow, and not just in that Virgilian Eclogues kind of way, where the complexities of a more simple life are reflected upon. Granted, the tradition and value of meditative poetry are surely alive and well in James McCorkle’s The Subtle Bodies.

But, lest we forget, two great poets have stationed themselves at either end of this meadow.

In the Jorie Graham portion, we have a speaker whose subjectivity about meadows and meadowing and knowing a meadow, and knowing of meadows that exist in the abstract, threatens to break the physical existence of this meadow into form and material existence of form.

In the Larry Levis portion, we have a nostalgia for meadows layering this meadow with a meadow that existed in Fresno, CA, a meadow that was beside the Missouri River during a flood, a meadow that someone had covered with a quilt, a quilt with this one spectacular scrap of yellow fabric, and maybe the nostalgia for that yellow fragment will actually overcome the meadow in front of us.

Do you get what is happening? First, James McCorkle’s The Subtle Bodies proves beyond a reasonable doubt that the 1990s style of meditative, speculative, esteemed and Romantic, in that big-voice sense of a Romantic-I posing as the most valuable subjectivity present in any imagined radius, is still a tinder box. It can explode. It can continue exploding the occasion of any single poem. Second, the voice of James McCorkle is like the lead apron put on your sensitive body parts when you’re getting an X-Ray. How comforting it feels to have something so heavy pushing your body into the examination table. How present it feels to your body parts. And by present, I mean PRESENT!

You might wonder: where does my body end, has my body absorbed the physical properties and the physical concrete presence of this lead apron? Oh, subjectivity, how negligent of facts thou art. How generous with details. Which is pretty much the entry point for James McCorkle’s poems. This dilemma between perceived reality and actual details constituting said reality.

In his poem “Cette Obscure Clarte Qui Tombe Des Etoiles,” McCorkle pieces together a landscape from the dark light that has fallen from the stars. Opening with descriptions like “To measure it, falling as if seed by seed across / The furrows” or “as matter becomes shape, / Defined hillsides,” he settles into the type of understanding he discovers in all of his poems–a mix of memory and speculation and detailed observation. But here, in particular, light assumes a number of figurations.

Light, coming as it does

Without relenting in its travels,
A sentence itself, moving
Toward us, with its unknown

Intentions, this light swirls, its great clouds
Falling as veils between this world
And some other, perhaps dream

Or what might have been said,
So familiar, we have been
Here before you want

To say, the lake lies there,
The wood just to the right of the hills,
Where vineyards tier

Down, the surface glazed
And without movement.

Note the shift in the third line of the quotation, when light is described as a sentence moving toward the viewer. The ease of that shift, the presumed sensibility (that light could be equated to a sentence), the further pathetic fallacy of it (that the light could have intentions), along with an easy return to the fact of it (“light swirls, its great cloud”), this is James McCorkle doing his slow jam grind on the mic. It is his operating procedure for making poems. It is how he sees and feels and does and ingests and gives the world again and again.

One version is not enough. One version is not an accurate rendering of the subjective understanding of any given moment. Consider the ekphrasis at work in this poem. The book’s notes connect the poem’s title to an installation by Anselm Kiefer, and I would say, on one level, the work responds to Kiefer in the variousness of its construction (Kiefer’s piece being made from lead, glass, clay, a bookcase, straw and paint). How many modes can McCorkle employ for his description? Light swirls. Light as sentence. Light as granules that settle on the earth to make what the earth is made of.

If I took this approach to describing, say, a meadow, it would be like an assemblage of the various subjective impressions McCorkle combines for explaining what he sees while standing in the middle of a meadow, a meadow blooming with so many different forms of life. James McCorkle is a shower of what alive is. More alive? Concurrently alive? Coincidentally alive? The meadow is a concurrence of being alive and thinking alive and having language to represent alive, but not the sharp alive, more the never resolved how to make alive not only the live portion but all the potentials for being alive portions that we can imagine, that a meadow might imply by the movement, by the language we keep assigning that movement that is still unequal to the complexities innate to that movement. Are there ever endings, really, when communicating what is potentially present, when just communicating what is actually present would take up whole pages of poetry?

Such is the nature of McCorkle’s alive to be more alive. A sense of alive piled on more alive equaling more than what the page of a poem can handle. Of course, this is well-traveled land of contemporary verse, the Romantic-I having been innovated and spectacularly exploded in so many lyric directions.

From “Reading Lu Yu During a Time of War,” McCorkle tries to explain “July,” that season of so much so-much-ness, and how, among that abundance, Lu Yu chose not to write poems, opting instead for seasons of change like spring and autumn. In this passage, McCorkle speculates about what happens when we are living among July’s abundance:

We have two lives, each overlapping so that
one is in the memory of the other, the season of one heightens
that of the other, perhaps it is this world and paradise that we
momentarily share in the warm air moving through the grape
vines and morning-glory encasing the porch. Perhaps there are
more lives inhabiting us–the deer moving past, the night-jar,
the owl and child stirring, we are all there.

McCorkle explains here we live not just one season a life might be existing in, but the recognition that while we are in one season, we are cognizant of how different it is to all other seasons we’ve lived through, and maybe this is paradise. But what paradoxical paradise that is, as the paradise is not just experiencing the moment, but accepting every possible modifying degree that we can see makes that moment different from all others.

Even as the book questions our capacity to sense and understand the world around us, it insists, at times gently, and at times abruptly, that this country has been at war for the extent of our lifetimes. And what that says about an American imagination is, perhaps, one of the “subtle bodies” at work in this book.