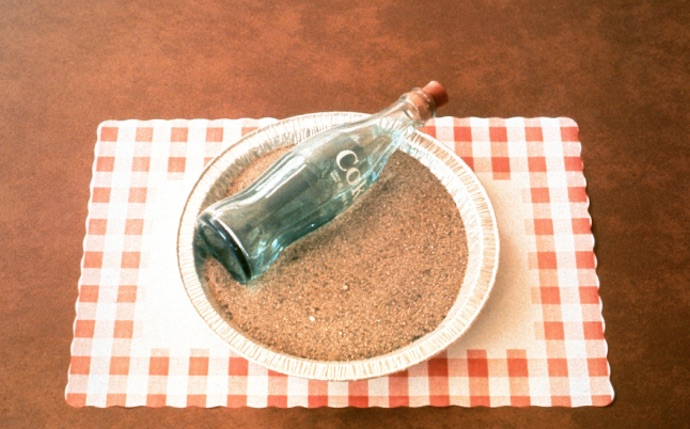 Emerging from the Los Angeles Conceptual scene of the early 1960s, Allen Ruppersberg has produced an expansive and enduring practice. Intellectual Property 1968-2018 a joint exhibit just finished at the Walker Art Center of Minneapolis, and opening this February at the Hammer Museum of UCLA, presents this work in the most extensive retrospective to date. Curated by Siri Engberg, Senior Curator, Visual Arts; with Fabián Leyva-Barragán, Curatorial Fellow, Visual Arts, the show captures his most iconic pieces, including Al’s Café, Al’s Grand Hotel, and the Novel that Writes Itself. It’s a revelation. Here is a brief survey of several pieces within the show. 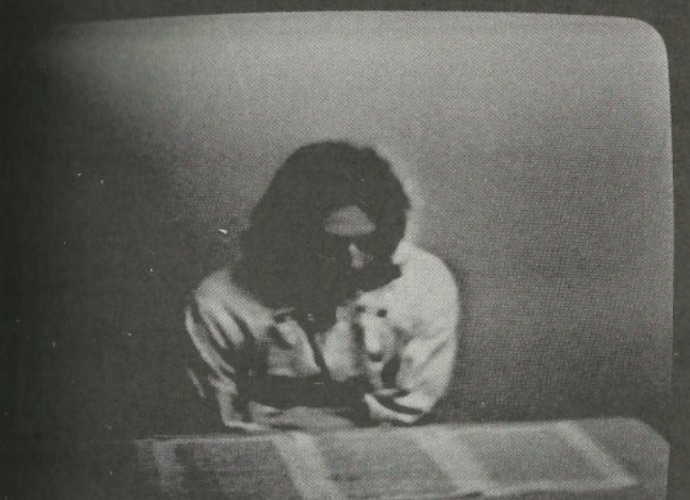 Ruppersberg struggles to escape a strait jacket in this black and white film performance piece. As he fights with the bonds, he reads an essay by Houdini. It’s delightful and cheeky. With this simple conceit, he captures one of the foundational principles of constraint in 20th century artistic practice.

Houdini was a proponent of vitalism. He championed the possibility of the human body, in the same tradition of Victorian muscle men and athletes. So that even though he was a “magician,” he rejected the supernatural.  He focused instead on the reveries possible through constraint, most literally through his terrific escapes. The shackles, the denuded body, irresistibly winks at S &M. And the spectacle of a body pushed up against a breaking point, describes the lived art that obsessed Modernists from Artaud to the Viennese Actionists.

When Houdini jumped manacled into the freezing Detroit River, he showed the way the process is the art.

Houdini had made his mark by escaping handcuffs, jail cells, and generally, strait jackets, usually while diving off bridges into icy rivers or being suspended upside down in vats of liquid. By the middle of his career, he began debunking séances and denouncing magic in a rejection of Spiritualism.

The Surrealist tradition of the avant-garde believed that automatism, and the influence of communicating vessels, obscure influences, inevitably produced epiphanies, somehow outside of the dreamer. This tradition was epitomized by Robert Desnos, who famously slipped into trances with only the slightest provocation.

Constraint, the second tradition, was epitomized by John Cage, and the artists that emphasized the experiment of experimental practice. This tradition, more defined by the constant reevaluating of form for practical ends, experimental n + 1, seeks to capture the subterranean fault lines of our lived language and thought cultures, without externalizing these faults.

By not escaping, Ruppersberg also emphasizes a core in Houdini’s practice: constant struggle against bonds as defining the art, so that the escape, when taken as an act in series, becomes nothing at all like an escape. This evokes the famous parable of Kafka’s Hunger Artist, who starves himself because it is his art, or Kafka’s trapeze artist that sought never to return to earth. The principle of friction within bonds becomes a design in itself. 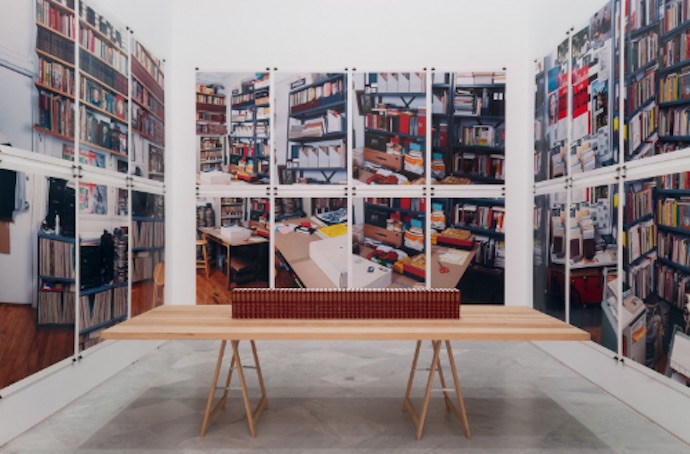 This piece is presented as a physical space to enter. Books line a tabletop, The New Five Foot Shelf of Books in the center of a space designed to look like Rupperberg’s studio. There are magnified photos of the artist’s studio adhered to the gallery walls. The interaction between person, memory, space, and information demonstrates the way the books in our lives correspond to the production of our selves. Named for a 1910 anthology of books that sought to collect all modern and classical literary knowledge, this piece features books with content rewritten by the artist.

In the 1990s, working in a studio, surrounded by books, Ruppersberg focused on the way the intersection of different information magnifies and amplifies, creating new information, and new people. It includes photos from the artist’s studio, including the many media, and information artifacts he collected.

Within the five feet of the shelf is a kind of unspooling limit. The information ripples out, and produces new information. The work is visible, concrete, and yet ultimately defining an edge that won’t end. It’s a lovely, and generous collage, with the constraint being something like the limit of our own thoughts and experiences.

In a 2009 interview with Cheryl Donegan for BOMB Magazine, Ruppersberg wrote about the sense of a text that expands from no certain beginning.

He quoted the godfather of constraint in literary practice, Raymond Roussel,

“Raymond Roussel said that when you read Locus Solus—or is it Impressions of Africa?—you should start in the middle. He thought it made more sense if you read from the middle on, and then back to the beginning. I always remember that. The book has so much information; so much to read on so many different levels. It’s like an autobiography. What you have is the softcover version of The New Five-Foot Shelf of Books, which is part of a bigger, physical work consisting of a 50-volume set of hardcover books and a set of 40 life-size color photos, each about 40 by 60 inches. The books reproduce exactly—from the covers, to the paper, to typestyle—the original Five-Foot Shelf from 1909. This was literally a small library compiled by Harvard University’s president then, Charles W. Eliot, who claimed that if you read these books you’d have the equivalent of a Harvard education.

“The second half of the original work is a to-scale photo documentation of my old studio in the Cable Building on Broadway and Houston in New York. When the photos are hung, they again become the studio. My New Five-Foot Shelf is not the reproduction of the Harvard classics, but a record of the ideas that were generated in the studio pictured in the photos.”

Somehow, Ruppersberg captures the connection between ideas, bodies, and the codex. And implicit within this rumination on limits, and amplifications, is the understanding that human bodies are constituted through systems of information. And that the production of coherent systems of information, also contributes to the production of coherent sense of human embodiedness.

Wandering into the space creates a sense of intimacy. It’s an introduction into a private realm. Because one simple way of interpreting all of this, has to do with the way that books come to constitute our senses of body and self. The New Five Foot Shelf allows us to visualize a mind space. Where is my mind? Oh, it’s over there on the shelf. Walking inside a personal library, is a way of walking inside of another person’s body. And the pieces of technology, the simple technologies, cultural artifacts, that make up our lived environments, like books, and chairs, and tables, come to represent our most intimate senses of self. 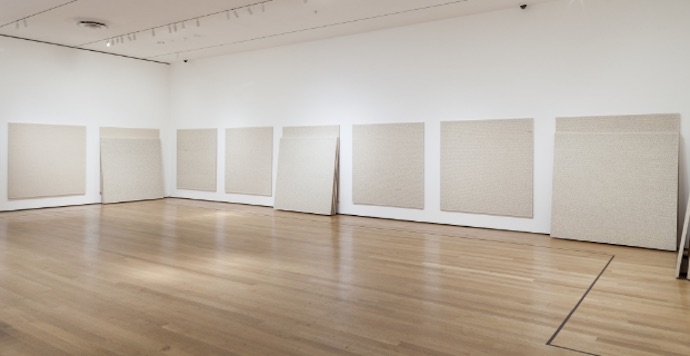 In 1974, Ruppersberg wrote out longhand Oscar Wildes’s The Picture of Dorian Gray on marker on canvas. This piece recalls much of that period’s enquiry into canvas as skin, and it demonstrates the essentially performative aspect of all of Rupperberg’s best works. By writing out the novel in longhand, Ruppersberg becomes Dorian Gray, in a cheeky sendup, recalling Borges’ Pierre Menard, Author of Don Quijote. The idea that through living the life, a canvas might preserve a life. The Picture of Dorian Gray piece embodies the ethic of becoming through performing. Ruppersberg lives the novel through writing the novel, on canvas, the skin that winds around the wall. It’s his own obsessive body.

Ruppersberg further develops this word-body connection in his rewriting of Robert Rauschenberg’s New York Times obituary. This evokes classical mourning practice; consider the wreaths and cenotaphs of the 19th century. Ruppersberg enlarges the printed page from the New York Times, and creates a complex artifact that embodies his deceased friend.  The complexity of the piece expands in a moody lamentation. It’s a lovely work, that fills your heart as it expands. The Rauschenberg obituary, illustrates the other side of magic, that resides within the incantatory mode of address. We live within our language, even when our bodies pass away.

Besides this work, and his monumental Dorian Gray piece, Ruppersberg also  composed a pencil diptych called ““Self Portrait (as Hurd Hatfield as Dorian Gray).”

Ruppersberg did a pencil drawing of a Hurd Hatfield publicity photo, and then seven years later, he recreated the same photo, under the same circumstances. It’s a great piece, and a great joke. It gets better with time, because its a gag about time. He challenges himself, to describe something once, and then to describe it again the same way.

1968-2018, even as Ruppersberg ages, the picture remains crystal clear.