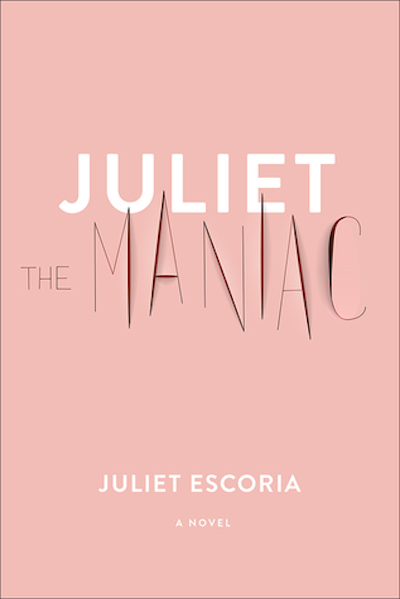 Juliet the Maniac is a dark, funny, and heartbreaking portrait of a young teenager’s clash with mental illness and her battle toward understanding and recovery. It has been reviewed as “Beautiful…fresh, forthright” and “An explosive work of autofiction.”

Juliet Escoria is the author of Black Cloud and Witch Hunt. Her writing style has been compared to Denis Johnson and Joan Didion, and LA Times has called her an author to watch.

Recently, we spoke via email about her new book, autofiction, adolescence, and much more.

RO: Because Juliet the Maniac is labeled fiction, I have read it as such, even though the protagonist and author share the same name. But there is a remarkable moment on pages 32 and 33 when the narrator tries to communicate to her parents what is happening with her mind and yet it proves too painful and so she invents an alter-ego: “I was merely transcribing the troubles of a friend. It wasn’t me who was experiencing this. Nope, not me. Not me. Just a girl. And soon it became true.”

This renegotiation of the speaker and the author and the character brings me even closer to Juliet throughout the book as opposed to distancing me from her. Talk about your relationship to this narrative-nesting doll?

JE: I think that’s just reality. There is no one truth to anything. Every aspect of history, whether it’s personal or global, is a nesting doll. I know it’s not healthy to think this way, but for so many years I just wanted an answer for the questions: What was wrong with me? Why was I such an incurable fuckup?

I had an experience while I was writing the book, where an old classmate and I found each other on Facebook. I told her about the book and explained I’d just been thinking about her when she popped up in my feed. She said she remembered me as being “nice,” which really fucked with me. I had assumed that nobody thought I was nice, least of all this normal-seeming, sweet, smart girl from my honors classes—that everybody remembered me as how I saw myself, which was a troubled, weird bitch. The nesting doll element was something I definitely wanted to highlight. Juliet the character in the book is not the same as Juliet the writer, who is not the same as me, Julia, because that’s impossible. Having all those layers seemed like a way to make the ideas behind the book more honest, not less.

RO: After finishing, Juliet the Maniac, I found myself thinking about the prologue’s final paragraph, especially in relation to the bad things we do as teens and the varying consequences they hold for different kids.

“But that was the year the rock star shot himself, so suicide was on everyone’s mind. Heroin still seemed glamorous, celebrities still smoked, and the radio played songs filled with angst. At that point, maybe I was still a normal adolescent, with the normal pangs and problems that come with that age.”

This distinction when compared with the mounting attack Juliet’s own mind inflicts and the fashionably destructive era of the 90s seems important to me. I wonder how, when writing Juliet The Maniac, you considered the contrasts between the realties of Juliet’s terrifying and vulnerable shift—hallucinations and impenetrable anxiety—in relation to the students at her elite school that acted out as part of cultural milieu?

JE: For me, in real life, that was a question my parents had, and one I had for myself: am I making this shit up? Am I exaggerating things? Is this some sort of role trying on? It felt like that from like, sixth grade through junior high, but that idea blew itself up early in ninth grade, when I started hallucinating. It quickly became clear to me, and soon thereafter to my parents, that there was something seriously and objectively wrong with me.

I wanted the book to show something similar. As the prologue says, “I was a slow burn that eventually imploded.” In my experience, that’s how breakdowns happen. I’ve had times where I thought, “Wow, I love life, shit is great, I’m suddenly so sociable and able to get so much accomplished!” and then a few days or weeks later I found myself in full-blown mania. Later, I’d realized the manic episode had slowly creeped up on me. It all seems normal until it isn’t.

The original draft of the book was about 10k words longer. Most of what I cut was at the beginning, a bunch of scenes showing Juliet being a regular naughty teen, slowly escalating into not-so-regular. But it seemed like too much to ask from the reader.

RO: In terms of being a regular naughty teen, I loved the interactions with Nicole, a wealthy and controlling girl who admires a triangle Juliet has cut into her hip with a pocketknife, an infliction the narrator thinks of as a way to relieve the “simple act of being herself.” In response, Nicole carves FATTY down her forearm and the narrator thinks, “This action done for me, to show me she was tough, to show me there was no difference between the two of us.”

But there is a difference, right? Nicole abandons Juliet the moment Nicole’s social ideas of rebellion pivot toward rap metal and icky dudes and Juliet stops being fun or defiant in the way Nicole wants. This relationship is placed in stark relief when Juliet meets other fucked up kids later on—first at a school called New Hope and then at an institutionalized boarding school. These new friends seem to understand Juliet’s mind without judgment. I’ve always been interested in how early friendships help shape our later relationships to the world. One might not intentionally raise a child to seek drugs and fucking in Burger King bathrooms but developmentally, it’s healthy for a kid to find a group of people where they feel normal.

Do you think that the act of living with other kids—kids who through the “simple act of being” seems to have disturbed the flow of family life, of school life, of elite friendships—created a sense of community for Juliet? Rather: While being with others who were fighting similar battles with mental health, did a space open up for Juliet to heal or if not heal at least super glue fractured pieces of a self back together?

JE: I think the problem that so many of us have with adolescence is we have no fucking perspective whatsoever. I’ve heard and read so many accounts of other teens who felt just as isolated as I did, and as Juliet does, but for different reasons: awkward bodies and faces, weird hobbies, race, sexuality, their family, learning disorders, physical disability, etc. etc. etc. It is only later that we realize we weren’t the only kid in the school who felt like a weirdo, even though we might have been the only one who felt like a weirdo for that specific set of reasons. So yes, definitely. At the boarding school, Juliet was provided with numerous living examples showing her that she wasn’t the only kid in the world who needed medication and couldn’t function in the “normal” world.

I feel like that’s human nature, though—more important to teens, maybe, but a sense of belonging is important to everyone. As an adult, my friends could all (or at least mostly) be described as productive, functional members of society, but it was a long road to get there. It’s hard for me to relate in a meaningful way to people who’ve never struggled with feeling like an outsider, and/or struggled with coping with what was going on in their brain.

RO: A lot of kids do fucked up shit with or without remorse and the way you present the at times disengaged and at other times self-aware and self-conscious teenage mind is one of my favorite elements of the novel. There is the moment when Juliet shoots a dove and then “brought my finger to my forehead and anointed myself with the blood;” and the moment when she and her friends find clothes and a handbag in a dumpster which were covered in blood that are promptly divvied up and the narrator thinks, “I tried to feel bad about it, but it never worked out. I really loved that coat;” and the moment when she sees a guardian, Hank, from the institution watching her have sex in the back of a van and hams it up, deciding even in the moment not tell on him.

I don’t really have a question. But I’d love to hear you riff on what it was like for you as an adult to get inside of those specific aspects of the teenage mind.

JE: They have that idea in addiction theory, that your brain is forever arrested at the age when you “picked up.” I believe it. My addiction started at fifteen, I got sober at twenty-six, and I had the emotional maturity of a teenager until I was maybe twenty-eight or thirty. It really wasn’t that far of a reach. Even though my insides feel like those of an adult now, I still feel like I have a teenage girl in there, this element of my personality that peeks out when I’m bored or insecure, an evil little voice that is judgmental, superficial, bitchy and self-serving.

It seems like that when books are narrated by a teen or child, they are often written as a “precocious” character, which enables them to be more likable and adult-like, I guess. I absolutely did not want Juliet to be “precocious.” She might be smart and sensitive and observant, but she’s also incredibly self-absorbed. Some of that is teenager stuff, but some of it is addiction stuff, too. In active addiction, it’s hard to look at the world with anything other than tunnel vision.

RO: As a reject from this decade, I really loved all of the 90s cultural identifiers—partying at the Heaven’s Gate house two years after the mass-suicide, making out in a closet when the Columbine shooting aired on MTV, the reference to Kurt Cobain—and I can’t help but think of music, favorite songs, and songs I denied loving but put on secret mix tapes for myself—like “Nothing Compares to You” by Sinead O’Connor. As a send-off, I thought you could share a 90s playlist that made up the soundtrack for Juliet’s life in 1998. Are you game?

“Only Happy When It Rains” by Garbage

(Both blink-182 and Sublime were inescapable in ‘90s Southern California)

“Sabotage” by the Beastie Boys

“Mambo No. 5” by Lou Bega (Every time I listen to this song, I find myself cackling maniacally)

“The Unforgiven II” by Metallica

“The Day The World Went Away” by Nine Inch Nails

“Butterfly” by Crazy Town JUST KIDDING, THIS IS POSSIBLY THE WORST SONG IN THE HISTORY OF THE UNIVERSE

I was really upset to discover that “Last Resort” by Papa Roach was actually released in 2000, not ’99 like I thought, and thus ineligible to appear on this list. Sad!