All Glitter, Everything: An Interview with Laura Relyea 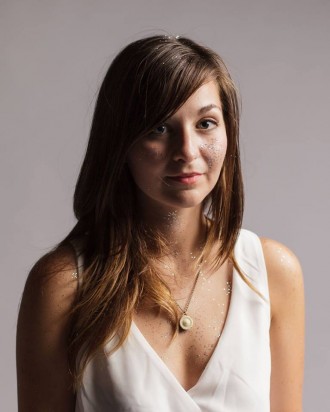 All Glitter, Everything, the debut chapbook by Atlanta writer Laura Relyea, is a story of friendship, change, growth, and Ke$ha. Yes, Ke$ha. Relyea takes as her muse the bold, non-stop glitter-covered partier who brushes her teeth with Jack Daniels, and in doing so equates Ke$ha as a sort of everywoman–our friends, the people we know, the ones who really know who we are even when we try to hide things from them, the ones who bring out both the best and the worst in us.

The brief serial narratives that make up the collection aren’t just an exercise in character study. They also create a strong portrait of friendship, with all its ups and downs, and tell the reader much more about the growth of the narrator than of the character Ke$ha, for the narrator’s own feelings of envy, hope, and fear are reflected through her descriptions of her subject. The book, perhaps, makes the argument that life really can be all glitter, everything, if we take agency for our actions and refuse to fear breaking out of routine.

Falling somewhere within the blurred categories of prose poems and flash fiction, the book is set to be released at the Highland Ballroom in Atlanta on October 24th. Relyea, who is the editor of Vouched Books and hosts the Vouched Presents reading series in Atlanta, recently discussed her new collection with Fanzine.

Fanzine: For your new chapbook, All Glitter, Everything, you take Ke$ha as your subject, but it quickly becomes clear to readers–and is something that you also mention yourself in the acknowledgments of the book–that “Ke$ha” serves as a stand-in for a variety of women. What was it about Ke$ha that made you choose her specifically to serve this role? And were there any other iconic women who you considered for the role?

Laura Relyea: There are a lot of things about Ke$ha’s persona that I both fear and respect. She is chaotic and carnivorous and unrepentant–which makes her really dexterous as a character. I guess Madonna or Lady Gaga would have been good candidates–they’re so adaptive as pop-icons . . . but there’s nothing about them that intimidates me or inspires me. No one else ever came to mind until after the project was finished. It was always Ke$ha.

When I started the project I kind of saw Ke$ha as my antithesis. I was at a point my life where everything was orderly and habitual and had a pretty predictable outcome, and I feared and repressed evolving because of the disruption that doing so would cause in my life. At its base level, All Glitter, Everything is an embrace of pandemonium.

FZ: And the women who influenced your Ke$has–do they share these same qualities?

LR: Not all of them. Some of them more than others, for certain. The stories exaggerate certain facets of their personalities.  Every woman (every person, really) has disorderly and wild tendencies.

FZ: There’s definitely a clear progression of the speaker throughout the collection–she is partly in total awe of Ke$ha, and she embraces that lifestyle some, but ultimately she is more reserved, and is definitely wrestling with some major life things, and she eventually leaves the party–both metaphorically and in the final piece. Can you talk about the progression of the speaker and the role that the various incarnations of Ke$ha play in that?

LR: I think, at first, that the speaker is perplexed, terrified, and tempted by the kind of life that Ke$ha leads. She’s drawn to the volatility of it and plays with fire. She gets burned. So does Ke$ha. In a way they engulf one another and then retreat–but respect blossoms between them. They’re never really at odds. Real love comes from respect, and respect is something that is learned.

FZ: In the process of working on these, was there a point where you realized you were done with Ke$ha? Or are you continuing to write KeSha pieces?

FZ: What sort of things influenced you during this project–did you get inspiration from any other serial character-based works for this project?

LR: Oh, I’m sure. I certainly read quite a few while I was writing. Thomas Patrick Levy’s chap Please Don’t Leave Me, Scarlett Johanssen (Yes Yes Books) was incredibly executed as was Peter Davis’ Tina. I’ve admired Ravi Mangla’s Visiting Writers series for some time too.

FZ: You’ve been a huge player in the Atlanta literary scene these past couple of years. Why is community important to you, and how has it affected your own writing?

LR: I blame my mildly vagrant childhood for my love of community. I had been enrolled in nine different school systems before my freshman year in high school, and a great theme of my adult life has been finding a place to tether/anchor myself to. Atlanta and the literary scene at-large have filled that void in my life. Every creative outlet in my life is a testament and appreciation of that–whether it be my writing, the Inman Park Squirrel Census, Vouched Books, or something else.

FZ: I was planning to ask you to talk about Vouched Books, but since you mention the Inman Park Squirrel Census, I feel like I have to ask you about that! For people who are unfamiliar with it, what is it and what is your involvement with it?

LR: The Inman Park Squirrel Census is real! In the Spring of 2012 Jamie Allen rallied a group of part-time volunteers to count the squirrels in Inman Park. We revealed the data with a Data Presentation and Spectacle and released infographics that Autumn (which is when I joined in as the “Whipcracker & Momentum Chief”). Afterward we raised money on Kickstarter to get our infographics printed and were selected as one of Kickstarter’s top 20 projects of 2012. Since then we’ve been giving presentations about our findings around Atlanta and selling the posters and preparing for our second count of the park this Spring.

FZ: For the chapbook launch party, I hear there will be glitter. Is that so?

LR: There will, in fact, be glitter. On the chapbooks, in the decorations, on the readers! Glitter’s cousins–sequins and confetti–will also be in attendance.

The launch party for All Glitter, Everything is Thursday, October 24th at 8pm in the Highland Ballroom and features Jayne O’Connor, Amy McDaniel, Brooke Hatfield, and Laura Relyea. Copies of the book are available online from Safety Third Enterprises.