The Desires of the Protagonist: On Alissa Nutting’s Made for Love 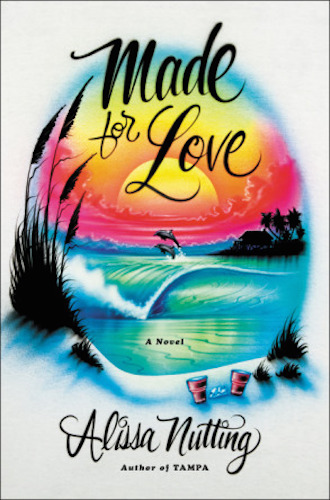 Technology has made it all too easy to believe in the perfect relationship. We keep a device in our hand that responds to every command immediately. On that device, we peruse dating apps, which are decried for urging people to make decisions off of appearance, but also encourage users to judge one another off a parade of arbitrary qualifications. Do you dream of a partner who supports you financially? Swipe left on the musician! The endless scrolling and swiping begets the fantasy: maybe the next image will be the ballerina with a PhD who also happens to be agreeable, charming, and sexually willing. When using a dating app, you’re trained to judge someone by what their profile illustrates about their potential function in your life.

Made for Love, Alissa Nutting’s sophomore novel, is full of characters who utilize the people in their life for functionality, but fall short of actually understanding each other as humans. It’s highly intentional—Nutting displays these tendencies like dioramas in a anthropological exhibit of a time in the future when relationships have metastasized to the point of mechanics. But she’s deploying a trick: she gets away with portraying this world by making it seem distant from our current state of social affairs, but the particulars of how her characters interact are terrifyingly close to our social reality.

The novel opens with it’s protagonist, Hazel Green, returning to her childhood home, begging to live with her father as she gets back on her feet. This is not an uncommon trope in culture: literature, television, and films have capitalized on the necessity for young people to need help from mom and dad when they can’t finagle the terms of adulthood amidst our late capitalist disaster. Hazel’s predicament is a few shades more absurd than the average misbegotten millennial tale: she’s fleeing a marriage to a tech mogul, Byron Gogol, whose estate of utmost surveillance became a literal and figurative prison. And, when Hazel arrives unannounced at her father’s home, she finds she’s not the only new resident: her recently widowed father has recently purchased a companion: “A life-size woman doll. The kind designed to provide a sexual experience that came as close as possible to having sex with a living (or maybe, Hazel thought, a more apt analogy was a very-very-recently deceased) female.”

Hazel’s narration zig zags between reporting the surreal absurdity of her escape from the Gogol estates and recalling her early days with Byron. As a college senior, Hazel was working at a diner and accepting that she would likely fail out rather than finish her degree. Her roommate asks for a bizarre favor: can Hazel impersonate her and interview the tech giant who is slated to be the school’s graduation speaker? Hazel says yes, and dons an ill fitting suit to meet the billionaire.

Byron’s superior technology has already alerted him to the imposter set up, and he calls Hazel out immediately upon her arrival. But he doesn’t mind the hijinks—he’s immediately taken with Hazel and asks to meet her separately of the faux-assignement. Sound a little Fifty Shades of Grey? It certainly did to me, though I’m inclined to believe that was intentional on the part of Nutting—the book is a satire of modern love, so why not pay homage a book that, at the very least, capitalized on the most fantastical aspects of that culture?

But the similarities end at the initial courtship—rather than desiring a girlfriend to enact a series of sexual fantasies, Byron needs, if you’re doing a sympathetic read, a queen to be a public partner in his empire, or, if you’re doing a shrewd one, a living female specimen to bring his experiments with technology into the realm of love.

The last straw for Hazel in her marriage to Byron was his desire to implant a chip in her brain, under the guise of an unprecedented level of connection—but in effect making her his beholden robot. The obvious jump here is: how horrid! Good thing this is a satire, far off from our current state of relationships and reality! There’s another read, though, a scarier one: not how absurd and far this novel is from our reality, but how close.

Where we stand as a society with relation to women is, to say the least, problematic: increasing reports of workplace harassment, celebrities weekly being outed as rapists, the assault on women’s healthcare. Made for Love examines how this plays out in the most intimate form, the marriage or long term partnership. Though the book can be read as fabulist, the relationships as alarmingly close to many embodiments of enacting modern love.

Byron wants the human Hazel to become a passive robot, and Hazel’s father wants a doll to act as a supine companion. Byron is portrayed as a monster and Hazel’s father as a doddering old man, but the living embodiment of this idea lives in the middle: an average guy, maybe even one who voted for Hillary and says he’s a #feminist, who still, at the core, wants not a living dynamic partner to laugh and drink and cry through the dying world with, but a passive vessel of unending affection and intimacy who fulfills a role forged not from reality but from a brain of solo fantasy. At the core, both Byron and Mr. Green attempt to create a relationship that fulfills all of their desires with little thought to the effect on the object of affection. What woman hasn’t experienced a relationship where she ultimately discovered that she was a tool to progress a man’s fantasy, fulfilling a role rather than being regarded as an equal?

What the men in the book are after is a one sided relationship, one where the betrothed enacts the desires of the protagonist without argument or reluctance. Made for Love is a missive to interrogate relationships: it’s easy to say you want wild love in a Pinterest worthy, quotable way, but it’s harder when you’re actually met with the chance that love with another full human can easily fail, because the lover is not a mirror or a doll, they’re a full human with fetishes and fears and failures all their own. Byron’s love for Hazel is projection: loving a blank canvas that mimics grandiosity only in the beloved’s ability to fake that they’re doing anything other than fulfilling your wishes. Being left is awful, and you’re much less likely to be left by someone who doesn’t have their own agenda. But in Made For Love, Nutting illustrates: the beloved blank canvas has a brain, and a human person can only reside so long in a partner’s fantasy, even if that partner is a billionaire with the world at his fingertips.

During Byron and Hazel’s courtship, he claims that she is “insanely interesting” to him, and you can immediately spot the hoax: Hazel in college is a downtrodden everywoman. She could be almost anyone, and Byron needs someone whose normalcy, whose pliability he can capitalize on. So what does he do? He claims that she’s fascinating, because when someone puts you on a pedestal, you want to believe in the image they’re creating.

“She’d wanted to believe the narrative that she was inexplicably lovable: one encounter with her and a calculating, domineering technology genius was swept off his feet. No strings attached. She did believe he’d been fascinated by her, maybe he still was, a little bit. But he’d assumed that choosing her meant she would perform feats of active gratitude on his behalf for the rest of his life.”

Byron, like generations of non-fictional men before him, expects that his benevolence in offering Hazel the ultimate prize of social femininity: a flashy long term heterosexual relationship, complete with the never ending cash prize, to be met with undying devotion and acquiescence to his plans. He offered her everything: home, money, devotion—everything but agency, which, Hazel finds, is a vital aspect of maintaining personhood.

These carefully rendered tropes of social sexuality appear again and again throughout the novel: in a subplot involving a serial seductive conman named Jasper, he contracts an affliction in which he is only attracted to dolphins, then gets a job at an aquarium and convinces himself that the ‘most beautiful’ dolphin, Bella, is the perfect partner for him. Absurd? Of course. But how much more absurd than meeting someone and deciding within a day or a week that she or he is the ideal partner, and going through the means of seduction to land her in your trap?

In a commencement speech that Jonathan Franzen gave at Kenyon college several years ago (I realize the literary faux pas of evoking the Jonathan, but alas, here I am), he talks at length about the tempting specter of technology as an easy alternative to the difficulties of relationships and the wild world: “The ultimate goal of technology, the telos of techne, is to replace a natural world that’s indifferent to our wishes — a world of hurricanes and hardships and breakable hearts, a world of resistance — with a world so responsive to our wishes as to be, effectively, a mere extension of the self.”

In Made for Love, this is ostensibly Byron’s endgame with Gogol. Replace dirt and nature and chance with predictable objects that enact our every command. He manages to do it with his home, his company, his products, his employees: the only area where he fails is his final acquisition: total control of his partner.

With the parallel worlds of Gogol Industries and a downtrodden town in Florida, Nutting has created a novel of binaries. Natural grime versus industrial cleanliness, prediction versus chance, primal human desires versus mechanical functions.

“Hazel was sick of everything needing to have a function. Function was the only thing Byron cared about. His first question to everyone, always: “What do you do?” by which he meant, What can you do for me?”

Made for Love posits that “What can you do for me?” is too common a question, and it is a question antithetical to valuing other humans: partners, but also friends, parents, and strangers, as living and breathing animals who fuck up and excrete and let us down. Humans are difficult, but the worlds Nutting builds with the alternatives–Byron’s estate of machines or life with a sex doll–are undeniably bleaker than the life Hazel reaches for in working to escape Byron. As she struggles, near the novel’s end, to fully escape Byron’s persisting surveillance: “Hazel wished that she and the doll could trade places. How great if she could send a microchipped mannequin back to Byron at The Hub and have him believe it was her, but all the while actually be in a weird manure prairie with Liver, growing into some different, wilder form of herself.”

Made for Love is an argument for that wilder life, as dirty and maniacal as it may be, as well as a plea: interrogate functionality, accept the risk in letting humans exist: not as machines or robots or fantasies, but as they desire to be.

Tags: Alissa Nutting, Made for Love