After The Storm: On Katie Jean Shinkle’s Ruination 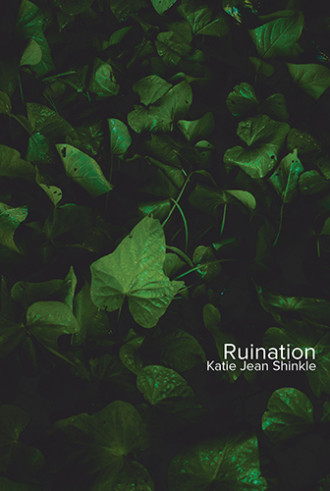 We imagine things will be better after a storm. We imagine there will be relief. We’ll find calm after the storm, ride out the storm knowing stability will sweep through us; we’ll figure out our lives when the dust settles, everything kicked up by the storm set down into place. We weather the storm, as if to survive a thing we must become it. A storm is a story — rising action, climax, new grounding situations — or at least that’s the story we tell ourselves.

Katie Jean Shinkle’s novella, Ruination, is a story about the limitations of story — a green nightmare that shows how our imaginations control us.

Ruination begins with preparations for the superstorm, which hits within the first 10 pages.

“Paula and I watch the mini-swirled cyclones skipping around each other, twisting at the base like two heads of the same monster, tunneling and dying…Later, houses plucked, gone like rotten eyeteeth. That’s how weather is, it can’t be trusted.”

The setting of Ruination is an unnamed place in the U.S. east of the Mississippi River, in a slightly dialed-up rendition of American patriarchy where not only are women meant to serve and placate the domestic desires of men, but women are also tasked with being the primary soldiers and defenders. A global war for resources begins after the storm, and all of the adult women are sent off to fight it. In their place: The Men are grieving, stressed, shattered. Having been socialized under patriarchy to subdue “feminine” emotions, The Men turn to violence. The Men turn increasingly to a reactionary Christian movement led by The Prophet. His pulpit is fascist: he guides The Men to fervent nationalism, to ideas of protecting their culture, their values.

All of this is told in Shinkle’s concise flash-length pages, some only a few sentences long. This reactionary nightmare is told in scenes alternating between our protagonist & her friends, her father, field reports from the war, The Prophet’s sermons, and the state of the natural world post-storm.

If Ruination stopped here, with taut sentences showing our unnamed protagonist & her friends Callie, Allison, & Paula navigating their lives as girls in a place without any mothers, it would be scary enough, especially with the nightmare-lyricism of Shinkle’s prose:

“Although they are gone, in the ghostly hours, our mothers still hang in the air, black spirits in the corners of rooms, talons clawing the nautical themes wallpaper…We watch them sizzle their tongues against our fathers’ ears and they scratch and bat as if something inside is attempting escape.”

I haven’t been able to forget the dreamy lull of these sentences, or the way they draw you in for the punch.

But Ruination does not stop here. Here, all the girls begin bursting flowers from their bodies.

“Our Friend Jetta Jackson is one of the first to be found in bed, rosebuds streaming out of her mouth onto the pillowcase and floor, thick wooden sprawl from her sternum, fingers and veins of aerial roots like toes…” “There are girls with chests and backs of buds and petals, death blossoms stinking….So many girls, instead of genitals, instead of a clit or an opening, instead of an anus proper, have flowers, have roots, have bark, have green buds, heads in season, so many have a forest, a new kind of incurable, transmitted disease.”

A common criticism of other dystopia of the patriarchy, particularly The Handmaid’s Tale, is how there isn’t enough focus on the people fighting and resisting the rise of fascism. What makes Ruination one of the single most vivifying novellas I’ve read in some time is that it’s all about the forces of resistance. The novella’s central girls are all queer. Allison and Callie are implicitly trans, and Paula and our protagonist explore their love & their bodies in rooms increasingly “protected” by their fathers, by The Men. All the older sisters, unnamed, are labeled terrorists for their insistence on their own autonomy. Our protagonist’s father is a sissy (a transvestite, a cross-dresser), explicitly not a trans woman, but secreting away his almost holy reverence for women by means of lace panties underneath his work pants & private dancing in drag to Cher, a kind of worship of more than identification with.

The Men turn their “protective” instinct into something darker. Anything but clean conformity is grounds for disappearing a girl. All girls infected with vernal bloom are carried off to The Center for Eradication, where they are experimented on & tortured until death. The devastating midpoint of the book is just a government-issued notice reading “All females exhibiting any evidence of vegetation on their person or in their household should be reported immediately. ‘Vegetation’ includes but is not limited to: Camellia, Saguaro Cactus, Apple Blossom, Queen Anne’s Lace,..” The list goes on for nearly 150 plants. Exacting, precise, and chilling.  The long list of unacceptable flowering to be eradicated is a fascist obsession with naming & stamping out difference, and yet the difference keeps happening regardless.

The diverse flowering that these girls experience feels like a resistance, vengeance, & it feels religious — an angry natural world claiming kinship with girlhood, recognizing itself in the girls as trod upon by patriarchy. This union of person & petal & tissue & tendril feels entirely holy. And as religious zealots always do when actually in the presence of the divine: they try to destroy it. Under The Prophet’s spiritual guidance, The Men are charged with looking to their daughters for reproductive labor, in all senses of the term. “Since Your Mother Is At War,” The Prophet instructs the daughters, “He May Need You To: sleep in bed with him, touch him where he wants to be touched, let him touch you. God Says, Honor Your Father.” 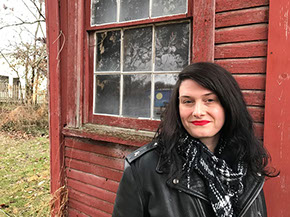 The book’s closing stretch is some of the most urgent writing you’ll find all year. And it works in part because of how the protagonist’s father is able to look this increasingly violent patriarchy in the face and say “We have to get out of here.” It’s something of a bold choice to write the father as a transvestite. I initially struggled with the character’s role in the book because of how transvestites/sissies/traps/crossdressers are routinely weaponized against trans women like me to invalidate us, and how the idea of the natural world sending a plague of flowers only to girls could veer close to trans-exclusionary if no trans girls sprouted violets or sunflowers. I do think Ruination missed an opportunity to make Callie and Allison more explicitly trans.

But the language of ambiguity, if not perfectly realized, ultimately serves the book’s vital lesson: that we imagine entire stories and concepts that erase the actual diversity in front of us. The book’s first page talks about the devastating superstorm as if our collective heteronormative, cissexist beliefs about gender and sex ARE the devastation rolling through.

“Four clouds exactly alike, black outline as if spiral on paper. Stratus or cirrus. Pareidolia in theory: what becomes a creature of wind, what becomes one blink signal or two, what becomes the shape of genitals.”

The concept of pareidolia is related to optical illusion. It’s when our minds insert a familiar image or pattern into something that isn’t there.

Transphobia is rooted in this. Homophobia is rooted in this. When confronted with difference, people have a hard time seeing it for the narratives their mind has imagined and imposed over the actual person in front of them. The growth of flowers within and from the difference of girls in Ruination is clear: the gender binary is a pareidolia, a pattern of our own imaginations. Most every girl in the book is described as having her genitals changed — turned photosynthetic & bark-crusted — to the point where the flimsy bases for the gender binary are literally unstable (no, there is no calm after the storm), and yet The Men imagine what isn’t there. And because the western gender binary is inherently a colonial project borne from the same reactionary forces leading The Men to follow The Prophet, it’s clear that fascism & its attendant white supremacy is a pareidolia.

And this is why it’s important that the protagonist’s father is a gender nonconforming man: he’s still a man, and because of his own experiences of being repressed under patriarchy, he’s seeing through the pareidolia that’s affecting the expressions of nearly everybody. Though heavily centered on the resistance of girls and young women, Ruination also places incredible value on the roles of resistance that men need to play in fighting patriarchy.

Ruination could have settled on being a nightmare. But it transcends dream to get to a place where it shakes our senses of material reality like rootgrowth destabilizing the concrete around it. Because what’s the difference anyway between our dreams and our social narratives of control?

Both are built of patterns imposed. Both are just imagination in service of complacency. Both are nothing compared to the vernal power of two women fucking on a mattress on a lawn as the sky spills all around them. In Ruination, Shinkle scares us into seeing a necessary truth: that our concept of what is natural prevents us from truly seeing the natural world.