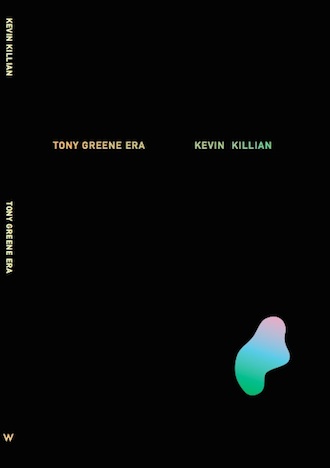 Finally, after a bruising fall of estrangement, someone who really loves queer art. Saved by Tony Greene Era, a book that’s as essential as Grindr and should be used no less frequently.

Writing in the thinned but steeling remains of rent-controlled alt San Francisco, Kevin Killian shows us how to take pleasure where we can, or make it. Under the coy guise of effortless swish, a delicious congeries of formal anything, with stories to match—a Slovenian seduction, epigram to the ubiquitous S.F. Bay fennel, that alluring willow tree and more. I’m looking forward to reading his memoirs, aren’t you? Plenty of things but not commodity—how does he do that? For one, the line of the world or the word is never so clear. It’s a bracing but sociable lot of anti-status quo crazy in the best way, with Killian following Celan trying his hand at variations on Hölderlin’s yes/no “Pallaksch,” signing a permissiveness (“And I have the Pallaksch feeling for you”) replacing that broken world/word babble or lallen (“…immer-, immer- / zuzu”). Hi/lo, it’s open borders here. The word a way of being in the world? Everything might be text, but you’d never mistake him for grad school. Even in creeping fascism, collapse, Killian’s showing us (fragile?) fun’s here to stay. Won’t you make friends, form community, too?

Hearing word from out West, I finally bought a copy from publisher-poet Ben Fama at the BABZ Fair in Maspeth, a big Catherine Opie photo of Greene’s former L.A. studio on the back, but I read my first poem from the collection months ago. Standing watching a boy perform at the Biennial, a text from an old friend and it was “Valentine.” He knows me well. “If I only had life to live / I would live it with a blond like you. / Frozen roses are frozen red, / frozen violets are frozen blue.” Okay, okay but you never get that structurally Riefenstahl thing, really. Speaking of Chelsea or glamorous, once cheap thereabouts, James Bidgood of the “Pink Narcissus” section culminating in the hypnotic “Bidgood Bidgood Bidgood” litany is a characteristic subject—at the center of something, marginal to something else. Cutting scraps, salvage, a sophisticate swaddled in lamb’s white wool, this poignant obscurity, singularity, perfection or care so oddly achieved. Plus camp, boys, that kind of Golden Age Hollywood tint, pink; if Kenneth Anger were Good Friday, you’d have to say Bidgood was Laetare Sunday. Also characteristically rolling over from community to collaboration, collapse across genre or media, come what may Killian’s reaching out smiling on the young—Life on Mars (2010), Boyland (2015)—or anyone reading, hiding in NY apartments. He seems nice from here.

I said a way. Can you think of another? Just look at Evan Kennedy, dripping with chrism after Bruce Boone’s heir anointment in Jacket 2 this Lent in the communion of mystic Spicersexuality. A kreis continues? Blessed Bruce Boone, who made rather a shadowy appearance I thought maybe paranoically in his two entries (as many as Brad Gooch) in the even newer Bellamy-Killian anthology, Writers Who Love Too Much: New Narrative 1977-1997: a scrap of the long 1985 Ottotole interview conducted by Charles Bernstein (skip the questions, you’ll like the answers), and the truly great “David’s Charm.” More than that I guess I’m thinking of the introduction. Groups, you know—would I? hermetic me!—and to the editors’ many credits, add that they tell it like it is. Like it was—was seen? Would you expect anything less from the candid, even cross-continentally legendary duo? But if there are two wings, two lines, from N.N.’s two daddies, you could say there was luscious, evocative everything practically baroque Gumps gift-certificate Glück on the one hand, and Boone on the other—marxism, mass, meditation, Bataille, the queer catholic Nietzschean reading. Feel him moving in and upwards, upwards. Well…gladly. A dialectic begging on its knees for history if ever there was—you might ask who wrote Margery Kempe if you didn’t already know the answer. Doesn’t that just show how far it goes though? In Glück’s enviable hands, the English mystic (“hermit and mystic, passing through the cloud of unknowing…”) could scarcely be more worldly—or love thee more dearly? Now take Bruce, sure, and a walk with a friend, a summer MLA study group, becomes…? Circles of friendship. The higher gossip. History’s ends. How far is he going, exactly? Where is this other world and what’s it all about? Anyway the point here is that you’re tempted to say, as I think my old friend has, that Killian believes in cock and community. Credo…confiteor? The over there doesn’t enter in that I can see. Sure, he knows what the rest’s all about—of course, he wrote the (Spicer) book. Taking away a modified (much friendlier) version. More the O’Hara line come to think—boys, friends, art, the city. And well placed then for expanding waves of community out and back east, south—Eileen Myles, Dennis Cooper, Chris Kraus, here, now, and there, too. Citywise, we can relate.

What a dailiness! In this world all his own. But you’d never worry (like Hejinian fastidiously to S. Howe re: Bernadette) about whether he’s creating a romance of the domestic. Could this be because his here is still very…over there? (Re)making the world from the word. Killian erat verbum? I’m conjuring up that mesmerizing vignette in Bellamy’s Academonia where she’s watching Killian basking in a screen’s blue glow typing away with two fingers for Amazon and what wondrous alien beauty.

Holding hands with Glück, Killian’s a virtuoso of pleasure on the left, and it’s the politics that really bares its teeth in the fifth and last section—the crunch after the sweet, a backwards toffee. Lighting a candle at St. Raymond’s. Here in AIDS pleasure meets its other face in death. Unlike perhaps slightly less recent remembering at the art/AIDS nexus (Douglas Crimp?), Killian sees body’s fragility written into art’s own being—sliding away from that perfect object, zine-era ephemera of artist-writers with their hands on the means of production (“long the dream of the Marxist and anarchist”). There’s that recurring “California art” trope too—“invested in failure and contingency.” And we really are paying attention from New York! (Yet though he left us, Spicer-like.) But you’d never think, reading Killian, who’s perhaps following Greene himself here, that the plague on gay good looks and talent was just something that happened, contra the Before Pictures kind of impression I’m afraid to say (printed more lavishly than written?). It’s woven in. Telling prose tales as well as he does, Killian’s a tease to stop at six pages or so, because you could imagine (and want to!) a hundred more—pleasure (art, friendship), the dark (sex/death), and that sharp clarity of who, why (a politics). Killian’s Guibert to Greene’s Foucault? You have to think of Killian’s Argento Series now and be glad again. Not that you’d ask for any less here in Tony Greene Era—the poetry/prose makes a very full short book. Full of what? Anything you’d want, dear.