A Type of Understanding Stripped of Vision is Feeling: On Christopher DeWeese’s The Father of the Arrow is the Thought 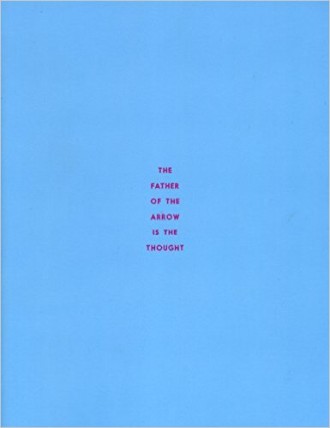 The Father of the Arrow is the Thought
by Christopher DeWeese
Octopus Books
$14.95 / 105 pp.

What exactly is the relationship between consequence and futility? How does disappointment, like the way disappointment feels in the body, change if disappointment can actually be recast, like, “Disappointment, you’re no longer a feeling. You’re a natural phenomenon.” Would Disappointment appreciate being like clouds, like when a poet is seeing clouds as more a phenomenon because they are looked at poetically?

When I read Christopher DeWeese’s second book, The Father of the Arrow is the Thought, I feel phenomenal. As in the poems are saturated with the overwhelming inevitability of nature, and the consequence of nature when you’re looking at it for so long, and I am experiencing the natural world, intricately feeling the world known by the “I” or “we” of these poems. We are “we” together. But not in that ecstatic kind of way. We all know Wordsworth and his thoughts about the poet in “a state of excitement.” I would like to cast DeWeese in that other slot Wordsworth proposes for the poet, a person “being possessed of more than usual organic sensibility.” These poems aren’t bursts of joy. They are. They exist. They are being whatever poems are on the page. I’m trying to say this as both an overly simplistic gesture toward that deep feeling that can sometimes come with reading poems, and also a genuine comment on how the profound can simply inhabit the body.

How DeWeese’s poems accomplish this is notable, partly for its seeming consistency across poems. Each one often opens itself casually to its occasion, as though whatever might have prompted this writer to begin, he’d been living with this situation for awhile. For instance, with the poem titled, “The River,” it’s safe to say he’s been beside a river for awhile, and, as a result of being here, a voice seems to rise up to the occasion:

It is a bad, bad business

to walk to the river

to cast aside your skin.

where I’ve been going,

on the other side

The poem feels so gradual in its account of what the poet is thinking. It is so quiet to my ear. No big deal, he’s just someone walking to the river. It’s “bad” business, but nothing alarming or terrible. And yet, by line 4, there is this lurking horribleness that appears in the poem, encroaching on an otherwise casual air. He’s just walking down to the river…to have his skin cast aside. In other parts of the poem, the rocks are tonguing “bloody light.” The poem is bumping up against what I would call a darkened air. Praise for florescent lighting, because it allows for people to better see their “cruel bodies.” There are starfish that get thrown into brackish water. All things that don’t really feel evil, only slightly malicious, especially when countered by more mundane observations, like a cheap motel that is on the other side of the river.

It’s this measured shift between casual and consequential that pulls the overall affect of these poems into what I would like to call the phenomenal. A phenomenon further confused by the frequent realigning of sensation. As in “The Valley,” which observes, “I don’t know / why sound is such a visual, / or why the dark, / a quiet contagion / through open windows.” Sound is visual? Dark is contagion? Equations like this have a sense behind them, which DeWeese spells out, but usually in figurative or imagistic explanations. Mainly assertions like these are, meaning they stand in their poetic confidence, where what the poet chooses to say suffices for the reasoning behind it. Perhaps this all stems from a tension throughout the book between the general and the specific. What might be the impending or comforting “big picture,” versus how many different ways the “big picture” could be experienced, or further, how many different ways that experience could be described.

In Oren Izenberg’s Being Numerous, he describes an unusual nationalistic authority found in Yeats’ earlier poetry. According to Izenberg, Yeats would call back to some common cultural moment that supposedly existed in Irish history, when the people of Ireland would have known they were destined for something great. Yeats’ talent was to sow that sentiment into his poetry so a reader would feel as though he or she were going to be included in that history, like here was the country of Ireland in a dream, and they were participating in a common dream. And, just imagine, they were with these poetic people on the threshold of the dream’s fruition. DeWeese’s poetry feels as though it is operating in a similar mode, at least from the standpoint of the poems being conscious of a bigger, phenomenal picture at play in a more particular occasion. The character of DeWeese’s common dream eludes my reading of the book. Is it nationalistic? Is it an eco-existentialism? I don’t know that it settles on a single dream vision, but it is enough that I sense its existence, and, assuredly, it is where I personally locate this sensation of consequence. Every poem has that sense of consequence. As DeWeese says in “The Pond,”: “It is a palm / struck under the chest / our pastoral makes of us” DeWeese’s poems have a biological experience to them.

Honestly, I don’t know how that happens. In my experience, reading poems that try to allegorize experience typically rely on an exaggeration of my imagination rather than my sentiment. It is the poem posing as the weird fable. Or that kind of “zany” poem that has the rhythm of a comedian’s monologue, but packed with more non sequitur or extreme associative leaps. And, while there is imaginative work in DeWeese’s poems, I am more often overwhelmed by their earnestness. As though they are aware the very impulse to allegorize experience is problematic. But what drives this earnestness? Is it that every experience here feels so consequential, and allegory would seem the most textured way of relating this to a general understanding? From “The Stream”:

When you take out the visual,

what’s left is a feeling.

It messes up your joie de vivre

and it is chronic,

DeWeese registers a type of life, a type of understanding stripped of vision, and that’s feeling. And it’s this idea that feeling would get in the way of joy or simpler joys, even as the poem itself identifies a series of simple, mundane moments in a life. DeWeese actively undermines what might be the lighter side of the imagination, while still maintaining the wonder. Perhaps this book accomplishes is a dark wonder, and this is the perspective that looks out at that larger world,  lending it consequence. But a newly fashioned consequence. A phenomenal consequence.

Tags: Christopher DeWeese, The Father of the Arrow is the Thought