It’s delightful to leave the sweaty streets of midtown Manhattan and enter the building at 724 Fifth Avenue, take the elevator up to the 12th floor, and step into the air-conditioned calm of Tibor de Nagy Gallery, where there is currently (until July 31) a show of 18 collages by John Ashbery, and 17 collages by Guy Maddin.

In his poems, John Ashbery is a master of taking familiar phrases from popular culture, inserting them into his poems, and giving them a new life in a different context. That same knack for culling the familiar is seen in his collages with images of Jerry Lewis, Morris the Cat, Beethoven, and the Pennsylvania Dutch Boy. There is a seat-of-the-pants spontaneity to his choices, and the results are a humorous alchemy of images.

Guy Maddin brings the same frantic elegance of his films to his collages. Many of these pieces feel like they could be panels from his storyboards. Like his films, Maddin’s collages have a sense of lurking surprise and a mischievous undertone. Almost all the collages in this show evoke some form of playful disorientation. Our view changes dramatically from what we see initially to what we see when we move closer to each piece, like optical illusions.

These two artists, each of whom has made a name for himself, to put it lightly, pursuing other art forms (poetry and film), have individually created a joyful body of work that is as generous and welcoming as it is surprising and funny. Ashbery and Maddin take the familiar and twist it just enough to nudge us into bemusement and disorientation.

Here are a few of my favorite pieces from the show:

Guy Maddin’s Untitled (#26) shows a man sitting upright in bed holding a pistol in his right hand and staring into the flash of spiny fireworks, piercing the darkness. At the bottom of the collage is the caption, “Flap them, boys, and flap like thunder!” Maddin illustrates hilariously that moment of waking up in the middle of the night, seeing an apparition, and our illogical response to it. 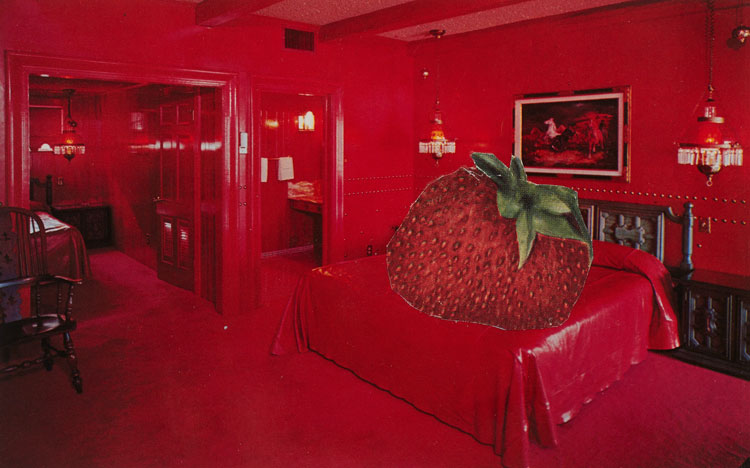 Ashbery’s Morris presents us with the famous “spokescat” from 1970s television commercials (AKA “the world’s most finicky cat”). Morris the cat sits front and center dressed in doctor’s garb, stethoscope, tie, and lab coat with a nametag pinned to the lapel labeled, “Dr. Morris.” The cat is sitting before a painting of a large low-ceilinged living room interior. The Doctor’s ears appear to be touching the ceiling. The blank, almost smug look of the cat seems to be saying, “Yeah, I’m a Doctor and a cat, so what?”

In Maddin’s Untitled (#06), three children, dressed in white linen, play on a green yard. One of the girls is blindfolded; her lower legs are disconnected from her body. She’s levitating on her stumps. A scrawl of a pen twirls behind the children like a gathering storm. The blindfolded girl’s hands are extended forward. She has no idea a little boy is glaring at her menacingly. Maddin has brilliantly captured the anxiety and confusion of childhood. 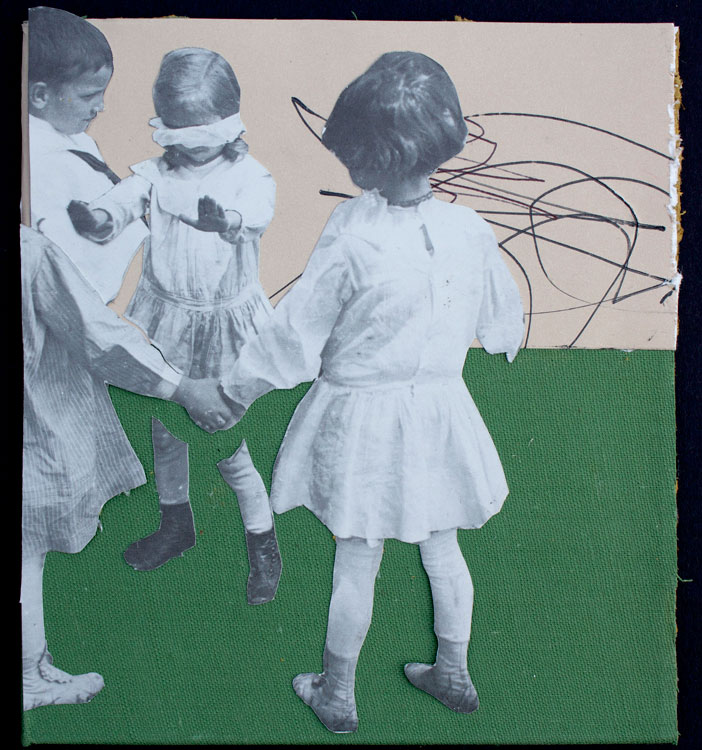 P.K. by Ashbery shows a woman with a jewel-encrusted tiara gazing downward mournfully, inconsolably even, at what looks like a chubby green praying mantis. On her neck is a gold and red cigar wrapper, placed like a neck brooch. These two figures, the sad woman and the chubby mantis (he’s looking right at us), occupy equal and important space on the collage. One can only wonder about the absurd nature of their relationship. 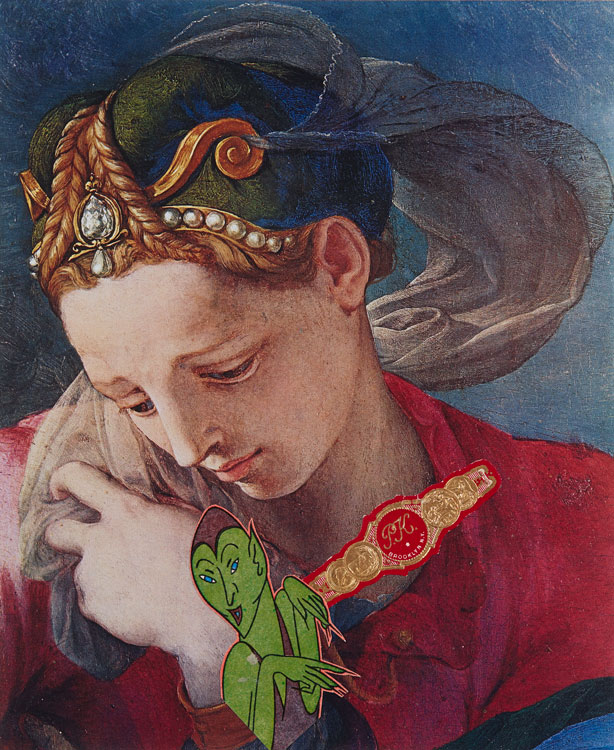 There are a few stylistic differences between Ashbery and Maddin that are notable. Overall, Ashbery often depicts a flatter, layered effect in his collages as in To Greet You, Dumb Dora Wins, Bingo Beethoven, Second State and L’Auto Stop. The impact of the collages lies in the juxtapositions of the raw images rather than a more formal, classic perspective. If Ashbery depicts a scene or a subject, he’ll often subvert the image by introducing another image that is on a completely different scale from the rest of the collage (see Second State and To Greet You). Some of the pieces could almost be viewed like still lifes from his worktable, which gives them a documentary quality.

Maddin, on the other hand, often situates the viewer in a particular place with a clear cinematic perspective. His viewpoint, while often skewed and manipulated, still allows his forms to occupy an identifiable space. There’s often a central figure presented in an environment filled with a sexual tension that does not blush or retreat, but rather reveals itself with a mysterious, almost sinister humor.

Collages work best when they are mining the absurd and the humorous. Ashbery’s and Maddin’s collages remind me of the collage tradition spanning from E.V. Lucas and George Morrow to Max Ernst and Kurt Schwitters, all the way to Joe Brainard and George Schneeman. Part of that humor is also reflected in the inherent transparency of collages as a form of expression. While looking at a collage, one seeks to trace the origins of the individual pieces and how they are assembled into a whole. In a way, the most interesting collages allow us to participate in the process of their becoming. We uncover the layers as we lean in closer to view the individual elements that make up the final form. We see the residue of action; where a cut was made, a drop of glue was dripped, or a page torn. And then, of course, there are the more practical questions that make the viewer ask: Where did the artists obtain their source materials? Where did Mr. Ashbery find the mint green game board backdrop in Minnie from Maude? How did Mr. Maddin cut with such precision with an X-Acto knife? What kind of glue did they use?

Just as the very best stage performers know how important it is to leave the stage with the audience still wanting more, the best collagists know when a work is finished. Ashbery and Maddin are masters of knowing when to stop. Nothing in this show is overwrought or strident. The collages have what the Italians refer to as “sprezzatura”: an elegant, but lived-in look that adds to the pleasure of looking closely at these collages. How refreshing to have these artists remind us what lovely things can happen when two people have some serious fun.