A Review of Tanya Olson’s Boyishly 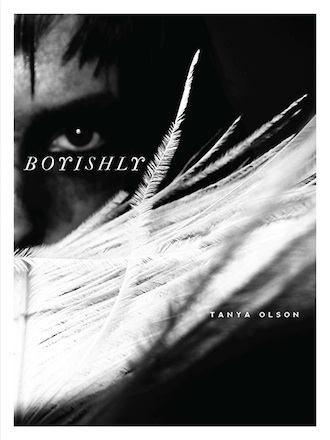 Tanya Olson’s Boyishly begins with a sectionless starter poem, like a welcoming thing, which poem, “Exclude All Other Thoughts,” begins with a narrator telling the reader to know “what an honor / we undertake together tonight. Treat /everything of this evening as an honor.” The specific scene of the poem is that the narrator and reader are before a corpse, which corpse is on a table, and “At nightfall, with only your words / running through your mind, climb / upon the corpse” and, the narrator tells us, the reader should “[c]ontinue to hold the corpse / securely to you, your mouth upon its mouth. / The corpse will thrash and buck / trying to free itself; think only / of your words.” The corpse will eventually stand but the reader’s advised to keep on it, mouth to mouth “until the critical moment arrives.” This is the moment the book begins as well, at least to this reader, and the moment is this:
At the critical moment,

you will feel the tongue of the corpse

protrude from between its lips. Continue

to exclude all other thoughts as failure

to control the body now will result

only in death. When you feel the tongue

fully between your teeth, bite down firmly,

cleaving through the muscle.

Once separated from its tongue,

the corpse will collapse. You may then

To call the poem weird doesn’t do much—it’s hugely odd, sure, but it’s actively doing something, and one of Olson’s big tricky skills is her ability to almost distract the reader: you’ll likely, until you (wisely, and hopefully soon) secure for yourself a copy of Boyishly, think of “Exclude All Other Thoughts” as that poem about biting off a corpse’s tongue, but, on heading through the poem for a second or third or howevermanyth time, you’ll find the bigger urge coming through like heavy metal: over and over, the poem’s narrator admonishes the reader to “think only of your words” and, as the title says, “exclude all other thoughts.” Plus there’s the fact to contend with that the narrator’s not asking us to do anything with the tongue other than salt it. That’s it. Bite the tongue off the corpse, salt it, clean your mouth, and, the poem ends, “[h]andled this way, our journey together this evening / should prove to be nothing but an honor.”

We’re being offered (I think) two guiding ideas or acts in the poem, the first of which has something to do with persona, with being/identity-as-act (which guiding idea is there, of course, even in the book’s title: even if a boy does something boyishly, adverbing his action begins a bigger tangle regarding identity and act). In the book’s first section (of three, though the second and third put together barely exceed the first in terms of pages), the poems all reach out and away to others: Gertrude Stein, John Brown, Jonah (the consumed-by-whale one), Matt Talbot (Irish ascetic), Muhammed Ali are all here. Sometimes these poems are about the person (“Matt Talbot walked Dublin / with crushed glass in his socks.”) and sometimes they’re to the person (“John Brown, I want to write you a poem.”) and sometimes they’re of the person (“Notes from Jonah’s Therapy Sessions” begins “At first, it is unimaginable. That God would choose you.”). The overwhelming sense of the first section is not just other, but multi-other, chorus-as-self, a symphonic coherency.

The second guiding idea has something to do with how again and again, Olson, in the whole book but explicitly in the first section, is working on something I don’t have a word to name, so mayeb it’s better to just show. Here’s an example from “Slave to the Virgin”: “Bound his body to learn his body. / Learned his body to forget / his body. How else to get to empty. / How else to reach freedom but by journey.” Here’s an example from “How Hard It Is Not to Buy a Tiger”: “How many men walk the docks. How many stop / to consider panthera tigris tigris. How many fail / to see tiger. How hard not to mimic tiger’s growl, / tiger’s swat. How hard to see tiger chained / and not think Me Mine It. How small is the cage of possession.” Plus then consider the direction from “Exclude All Other Thought,” the way the narrator keeps telling the reader to “think only of your words.” The way the poems end up reading, as a group, has something to do with process and narrowing, or perhaps as if Olson’s poetry’s on a quest for irreducible aspect and, in finding that deepest unsplittable thing, the poems will have identified where the spirit or essence of something is. She discards with a fervor I haven’t seen many other places: those lines above from “Slave to the Virgin”? Talbot, in the poem, needs to bind so that he may learn(/know), needs to learn so that he may forget, needs to forget to he can be empty, needs to be empty to be free. Olson’s stuff is emphatically, wildly transformative, surprising as sudden weather changes.

That could all be a load of hooey. I don’t know. There is, however, a searching element all throughout Boyishly and the search transpires in a gorgeous, messy way. Take for instance “Rose Goes to Sunday School in the New World,” from the second section, in which Olson (sure: the poem’s narrator, though it’s gotta be Olson) tries to square, for little Rose (the child of the lesbian couple with whom Olson’s neighbors), the fact that she’s a girl but has short hair like a boy. Note, of course, the poem’s title, and then consider the fact that, in the poem, Rose has a jungle-gym in the shape of a boat—an ark, as in Noah, as in two of every animal (not just boy and girl, man and woman, mom and dad: Rose has two moms, two of that animal). Or consider maybe the most I-can’t-believe-it poem in this or any collection from the last several years, “The Retarded Astronaut”:

Everyone says Does she not know

Can she not tell Everyone says

She must know How could she not

know Everyone says It’s so obvious

Even she must know Someone says Maybe

no one’s ever said it to her Maybe no one

has ever told her Maybe she doesn’t

know Everyone says She has to know

Someone says If a retarded kid

wants to be an astronaut no one says

Kid you’re way too retarded to ever

be an astronaut No one says You can’t even

name the planets No one says You don’t know

how to count to ten Everyone says That’s great

Someone says Surely she must know

Someone says Maybe she doesn’t

she thinks she can Maybe she thinks

she’s capable Everyone gives her a hug

Everyone says You’ll find the right one

someday Everyone says You know

it’s not you Everyeone says Keep your heart

open Everyone says The right one is out there

somewhere Everyone says Does she really not

know Surely she has to know Everyone knows

Someone says The moon is huge tonight

Someone says We’ll all live there someday

Everyone says Maybe someone should just

tell her Someone says You would think

she would already know

If you’re not reeling from that, I don’t know what to offer. Again, we’re well within Olsonian territory: there’s a slippery digging going on, an attempt to get at a situation’s root. Of course, in this poem (as in lots of others), what appears to be the principal search (to discern how a retarded astronaut could’ve achieved that station) bleeds a bit into what sure reads to be a whole other search (how can the bit beginning with “Everyone gives her a hug” not be about love?), and then the reader’s left with this dual ringing, trying to square things: how is wanting but failing to find love akin to a retarded astronaut’s plight?

I don’t even know how to qualify this book, honestly. It’s both methodical and wonderfully destabilizing—perhaps destabilizing because it moves so smoothly, so carefully. Nowhere in here are there ringing skittish zinger lines, nor herky-jerky obscure lines begging for squints. No. Olson writes, toward book’s end, “You can die with a giant wad of love / Jammed up in your heart, your heart / a mine shaft stuffed full of sub-bituminous coal / no one thinks worth taking. Everyone else / can find a miner to scuttle out their veins.” Boyishly is, of course, a work of longing—as all poetry is—but the patience and fervor of this longing coupled Olson’s voracity (for voices and selves and tongues and others) mark it as one of those sleeper books, the kind with the hooks that sometimes don’t catch quick but holy hell do they catch deep.