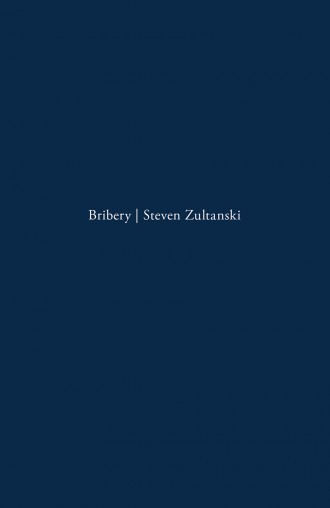 Some days I open the door to my house and I walk outside not knowing exactly who I am, or sometimes I begin to pattern my behaviors from the person that I believed to be who I was just yesterday, and, seemingly naturally, these two confused entities begin to crust over each other until the mirage of an embodied individual human-entity is on its way to work. I’ve been sitting in a leather chair inside the Sykes College of Business at the University of Tampa reading Steven Zultanski’s Bribery (published by Ugly Duckling Presse in Fall/Winter 2014) between 9:00 AM and 6:00 PM — noticing the voice(s) projected onto the blank individuals walking in and out of large doors into even larger halls. I couldn’t help but notice that I was no longer reading Zultanski’s long poem of kaleidoscopic crime wave confessions, generative paranoid rantings, or mutations of noir-esque/exploitation flick modes of complicated intimacy, but was rather listening to the poem through the faces of the people that I never identified with a face.

Bribery is a poem that is taped up somewhere on a weird park trash can (maybe the kind behind the rec center storage shed — like an old barrel painted green with a black garbage bag in it) at night. Steven Zultanski’s Bribery is the House on the Edge of the Park (an Italian exploitation film directed by the legend Ruggero Deodato, director of Cannibal Holocaust) of poetry: “The world is worse than ever, it remains/the worst. The only thing it really does is get worse.” — House on the Edge of the Park gets worse as it goes along, accumulatively visceral and humanely alien, unrelenting in violence and exposure, which only makes it better to the audience’s expectations of the genre, just as on the first page of Bribery, Zultanski begins: “It’s that one can’t, at any given moment, get any worse than one already is, without sliding into another moment altogether.” Those other moments are always worse though. The poem’s progression of sliding into other moments altogether seems like a falsity and a delusion of the speaker (which, given the pseudo-confessional approach of Zultanski’s Agony — I can only read the speaker’s I as being the I of the author), as if this quasi-salad-of-immediate-truth isn’t curated from the collective voices of street urchins everywhere, but is rather a transcription of the humming machine-like dictation of one massive street urchin amalgamation.

When I open up the PDF of Steven Zultanski’s Bribery, I immediately wonder what I got myself into. I say to myself out loud in front of my colleagues, students, administrators, and staff members, “Nah, I really don’t think I want to read this,” and straightaway imagine myself having to explain to these people at an academic conference about why I really don’t think I want to read Steven Zultanski’s Bribery. I’ve never been to an academic conference. Approaching the pedestal at the academic conference, I begin: “The transportive urbanized domesticity of criminal actions in Zultanski’s Bribery demonstrates the shared experience of criminal ambiguity as a device to define a hampered critical analysis of human relationships — limited to areas of vulnerability, which, in this reading, are essentially the openings to the taste and touch of unsolicited error. The initial criminal act in Bribery loses intrusive elements as it becomes a platform for person-to-person interactions, further complicating the transition of the speaker into the defined other moments.

“On page 50, Zultanski writes on the speaker’s controlled urge to touch a young boy’s arm, ‘its initial site of reality… and into everything else around it, all those other empty unreal sites brushing against it’ illustrates the severe complexity of the subjects in fleeting, unrefined human touch. Further into the poem, Zultanski reiterates that the passage of time (the limitless turning of the Conqueror Worm) is endless and that these acts concretize the constant of humanity, despite the violations permeating throughout not only the act but also the act not committed.

“Throughout Bribery, Zultanski conquers the psychopathological litany of the authoritative criminal figure, the operator of exploitative communal transfigurations, by simply creating such a thing. As both a victim and occasional advocate of criminal activity, the Jekyll-and-Hyde personism of Zultanski’s disengaged atmospheres enter into a multifaceted analysis of elements necessarily stationed for the modus operandi to function in all of its smooth criminality: the site, the subjects (the victim, the by-stander, the middleman, the witness, the criminal, the authority), the internalization of the event, and, foremost, the systems in which these elements operate so successfully. The speaker’s roaming, near-paranoid breach of mind-barriers comments on the genealogy of evil in American history, implicating all US presidents as a monstrous Frankenstein-like pieced together embodiment of state terror: ‘The US president is literally guilty of pretty much everything: he traverses time and space/with bloody glee, sparing no one and nothing his indiscriminate/wrath, his undifferentiated existential fury/aimed equally at everything extant and not, his unbridled will/to do all the bad he can during his short time in power, to make/the most of these eight years such that they subsume all of awful history,’ and ‘Obama perfects himself in Bush who perfected himself in Clinton who perfected himself in Bush who perfected himself in Washington.’ Penultimately, Zultanski’s work nearly exposes the banality of the person-to-person criminal act in the text’s generative expanse on the centralized…”

As much that Steven Zultanski’s Bribery is a video nasty, it is also a note on the anxiety-riddled tenderness between individuals (and strangers) in a country (world, space, atmosphere) overwrought with information sickness. Steven Zultanski’s Bribery is “Paranoid Chant” by Minutemen: “I try to work but I keep thinking of World War III/I try to talk to girls but I keep thinking of World War III” / “the global air crisis that led to a series of not so much wars as vicious retaliatory ankle biting: one country (or fragment of a country) would fling chemical weapons into another, and then that one would use a heat ray on the capital of yet another country” — I’ve read Pad, Cop Kisser, and Agony by Steven Zultanski, and if I was going to decapitate, surgically meld, reimagine coagulation, and night stalk each book for the purpose of creating a full-bodied Zultanski monstrosity (much like the book’s President Frankenstein [see: Death Race 2000]), Bribery would be the failure to re-embody the ominous central nervous system that has resisted reunification: the floating brain from The Brain from Planet Arous that I wish was the monster in The Brain That Wouldn’t Die solely for aesthetics.

You’re not going to get the brain that you want in the moment that you want it in Steven Zultanski’s Bribery. It’s a floating disembodied identity that effortlessly allows (or, rather, lacks knowledge of the act of) brain functions to mediate lightly toasted conversations with friends into anxiety-laden fears about the ownership of acts uncommitted. It’s a confessional transcription of anxiety-induced insomnia-infested weeks of nights-into-days. It reads like a graph. I really hope the book wasn’t bound with animal glue because it’d be a universal crime if a horse, rabbit, or fish had to die for this book to materialize. I wouldn’t recommend it to anyone. It’s a faith-devoid exegesis of male boredom. It is despicable filth and I wouldn’t ever imagine this book shitting up the poetry rack but instead should be found in some flea market cardboard box. I think Steven Zultanski’s Bribery should be put on trial for the violation of United States obscenity laws. It is quite obvious that Steven Zultanski has prurient interests.