A Review of Patrick Durgin’s PQRS 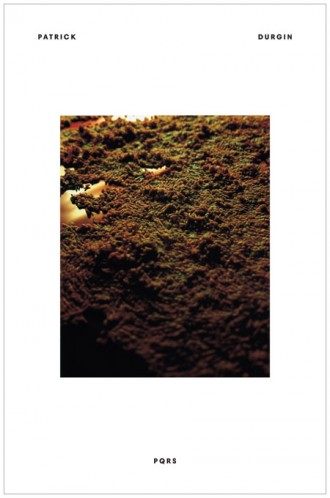 PQRS is a mess of genre, mixed media, and script; it is both part poem and part critical essay. In his notes, Patrick Durgin explicitly states that sections of this piece were taken from his other works, lifted wholesale and placed after the speaking colon. This is a kind of conceptualism: take the genre and fill it until it exceeds its own boundaries and becomes something else, or something several.

What does it mean when our work is easily archived, searched, collated, cut apart, pasted back together, quantified, shared, compressed, leaked, and otherwise shifted from one place to another? Its materiality is questioned, since material things aren’t supposed to be that mutable, although maybe that’s naive. Still, what does it mean when our genres are wholly pierced through and bled out? According to PQRS, it means nothing. Or, it means only possibility. In this demi-play, Durgin uses the form of a play’s speaking action to build deep trenches between what is being said, who is doing the speaking, and the origin of those words.

In the acknowledgements section, Durgin explicitly states that portions of this text were stolen, mixed, shifted, and wholesale created in the weeks before PQRS was published. He says, “This and my generally poor memory make accurate acknowledgements difficult, probably impossible.” What do we make of a text that is explicitly tossed together and shuffled through so deeply that its creator can’t even keep track of the individual body parts? It isn’t relevant where exactly any one word came from, but it is important that parts come from somewhere else outside of our image of the creating subject. This minutely reorients the text away from traditional forms of genius and authorship and places it closer to a contemporary gathering aesthetic of copy and paste.

This is the world of PQRS, but also the world in which we live. Its eponymous characters P, Q, R, and S seem like amalgamations more than are true characters, and they tend to blend into each other from one section to the next. There is a vague separation through suggestions of familial ties and bonds, but there are so few distinguishing features that they should be read more as convenient placeholders than as actual breathing people. Q says,

“With feeling! Aplomb! Which is which? What do I know? What difference would it make? What’s insipid is the presumption of distance when we are each and all perfectly familiar. From the perspective of life, don’t forget, there is a very short list of elements, and each of them is well known, each in the very same way. Am I speaking to you? Do I exist?”

Here, Q’s first monologue of substance suggests his awareness of their inseparableness and of their intrinsic togetherness in this abstract and under-imagined landscape of the page. What’s the difference if one character blends into another, if our names are so similar, if our words are just thinly-veiled remixed other-texts? There is no difference and it doesn’t matter. Either way, these characters are going to slip from moment to moment, their lines delivered dead-pen, their lines trending toward non-sequitor. The effect is a smooth morphing of language, scene, and line drifting and clashing into and through each other. It’s a heterogeneous space of bodies delivering lines on a page.

The characters, while dizzying in their shifts, keep coming back to a few topics: soliloquy, essay, poetry, fiction, and drama. It becomes clear early on that the foundations of these genres are at stake. S says, “If soliloquies are essays, poetry is not overheard in order to be audible.” In other words, an essay is a kind of silent soliloquy for the page, and poetry is always spoken whether or not it’s read out loud. There’s a distinction and a blending of sound, silence, reading quietly, and performing. Later in the book, Act Three: Scene Two is titled “The Maudit Tradition,” and this section is essentially an essay put in the mouth of P. There are no stage directions at all and no dialogue from any other characters. It’s very clear that this both soliloquy and an essay which was adapted for the book. This scene begs the question: Who is speaking in an essay? The academic essay is supposed to be distanced from the speaking subject. But with language, Durgin suggests, there is always a speaker, someone behind the text. Regardless of the tone, there is always sound. P is the speaker of this essay, maybe the author, but maybe not.

In the central, non-spoken section of the book titled “Intermission: Metaphysics,” Durgin lays out his theory of drama and soliloquy. He says,

“The ideal drama lacks all psychology. Its conflict is (purely) immanent to its action—supposition succeeds suppositions without reflection in the least. The ideal drama is something never done well but then well enough done.”

PQRS lacks all psychology. PQRS is not well done in parts, especially its overly long “Act Two: Scene One,” but as a whole it’s very well done. The characters have no depth, which is a good thing, and only the slight hints of relationships, connections, and webs of affect. But their lines are piercing and the way Durgin blends speaker, essay, and soliloquy points toward a greater warping of poetic terminology. “Soliloquy is a plea for oversight,” Durgin says, and later, “Soliloquy is only the most lauded form of self involvement.” It’s a desire for the other and the other’s active involvement, but also grand statements about one’s own self. How can a person soliloquize for anyone but herself? “Because you cannot choose misery, failure must be a matter of obedience. In the same way, an audience is not so much finicky as forgetful. Gertrude Stein said that.” I am both finicky and forgetful. This review is soliloquy and essay, poem and fiction. There’s nothing true, but parts are close enough. I’ve forgotten almost all of PQRS, but what I remember is worth remembering.