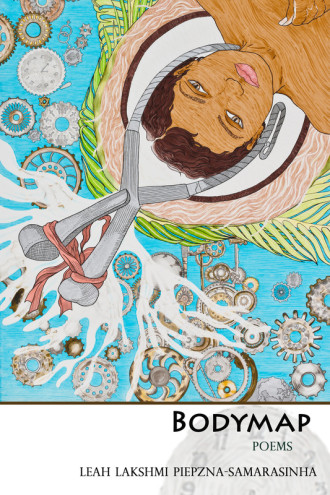 Bodymap, as its title suggests, marks the body as poetry’s originating site. It is a book that snakes along the physical messiness of the bodily, evading capture, delighting at performances of deviancy. But to say that Bodymap is visceral would be incomplete, as if the physical—the pain residing in aching hips, for instance, or hard sex against a car in a parking lot—does not also belong to thought, memory, and inheritance. At times fiercely solitary, at times softened by love, the book charts the experiences of a queer disabled femme-of-color, constructing a logic vast enough to contain all the contradictions errant bodies can bear.

A blurb at the start of the book describes Bodymap as a “landscape that refuses to be charted by the voyeur’s gaze.” This is the book’s distinguishing character: it rejects easy (mis-)characterization. For example, though Bodymap gives voice to intense trauma, the speaker is often gentle (“I accept all these in my body’s archive / as a true story”). This gentleness buoys a refusal to be cut down, simplified, or irreverently gazed at, even if the book itself delights in irreverence.

Bodymap is organized into six larger sections. Each of the six sections comprises of individual poems or prose-like sequences. The sections are loosely organized by theme, from cultural imperialism to ableism to queer sexuality to family. This immense spectrum of experiences is lit up throughout by anti-colonial, anti-capitalistic, and anti-racist attitudes. There are poems here that sometimes ask to be read as stories that have coursed through many lives. There is that feeling that what meet the eye are distillations of a long history, temporarily inhabiting their current forms on the page. In their own fleeting ways these poems command attention, and Piepzna-Samarasinha’s strength lies in her seamless integration of a distinct, individual voice alongside acute commentaries on social injustices.

There’s an underground river flowing through every queer-of-colour community I’ve ever been a part of and kissed.

What appears as an innocuous metaphor of life and love—a river—transforms itself throughout the poem. At one point, the river becomes literal, an industralized carrier of factory toxins and disease:

Drinking it, you could feel your cells shrivel, and you knew you were forever fucked, a dirty river girl drinking dirty Worcester water that would make you too sick to even make it out.

But the downriver speaker not only does makes it out, she is resolute to shout from down below, to make out her own voice, to avenge those who have been silenced…even as she finds that the river and its poisons are not so easily transcended, as she finds her working class mother’s ovarian cancer “blooming [inside her] like algae in a polluted lake.” At this moment, the speaker softens, and shifts toward acceptance. If environmental racism is shaped by a society’s rejection of what’s considered unworthy, not good, not lovable, then resistance and justice comes in the form of acceptance:

All our bodies sick and fucked for no good reason.

Just some dumb stories we made up that no one wanted to hear. //

all it takes to love a river that polluted

a body that full of story

Bodymap is critical of a capitalistic and ableist society that discards those who fall outside of the bell curve of “normality,” whose very survival marks them as deviant. How does love and romance look like under these conditions? The poem “Melanin night sky full of stars” gently subverts ideas of attraction with a pride and tenderness that feel almost contagious:

The doctors call it neurofibromitosis II. Said they’d never seen any child with so many birthmarks. You call it melanin rising. The darkness in your body, the Palestinian and African blood refusing to shut up. // Some days when we walked down Telegraph you folded over trying to hide from everyone who stared at you, but on the lemon yellow silk coverlet of your bed, your body flew open.

In another poem, romance manifests as rejecting the ease of apathy: I like dating white men because I can kind of check out / with you I have to be present and that’s real hard.

Romance also takes on the form of emphasizing instead of masking different abilities. In another poem: I posted on your wall, “My cane is brown and curvy and strong like me. Maybe our canes could go on a date? You posted back, “I’d like that very much.” And it was on.

At the same time that Bodymap’s speaker calls for social justice, she does not spare the culture surrounding the nonprofit industrial complex and marginalization:

and nonprofit movement jobs you wanted

when you are too tired

to cook your own food

you can pay too much

for a tasteless version of your culture

that promises it won’t kill you.

The acerbic voice marks the speaker’s survival, a state not to be taken for granted:

sometimes you will forget that not everyone knows the inside of crazyworld. You’ll wake up with a start when you realize there are those whose brains never melted, who have never kissed the inside lip of the mouth of the gun of trauma. You will stare awake at their stares.

Piepzna-Samarasinha is intent on highlighting the darker, overlooked corners of universal conditions. She succeeds. Bodymap, as a result, is a book with a yearning heart that wants to invite you into its world, wholly and sincerely. But it is also vengeful and fiercely protective of itself and its inhabitants, especially against those who enter and forget to be conscientious guests.