Jenny Erpenbeck’s The End of Days 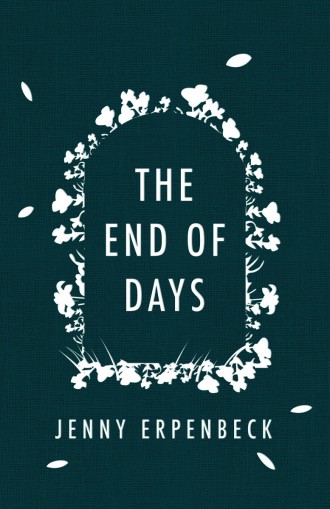 A stiff, a corpse, a cadaver, the remains, a body…

Jenny Erpenbeck is telling us that she knows and can count the ways death and the dead are euphemized. From the first line, she’s telling us: “The Lord gave and the Lord took away, her grandmother said to her at the edge of the grave.”

Translator Susan Bernofsky is in on the joke: slyly making English readers aware that each character is standing right at the thin, idiomatic boundary between life and death. This is a dark novel of dark realizations, a serious one and a slow-burner with a searing wit. And it is chock full of bodies, many dead…every last one dying, since: what is a body in all its days before the end?

Even revived bodies are given short shrift. Art (i.e. the complete works of Goethe with a tell-tale scuff on the seventh volume) doesn’t reflect individual greatness, only weakness. These frail, awkward corporeal encumbrances called bodies are cast in a revealing light against the stunning tricks of written language. As an old woman is falling down the stairs, she ponders the embarrassment of such a fatal and banal trip. When a son ruminates on his mother’s fatal fall, he asks himself whether she stumbled or slipped. Each character runs keystone circles after the same quandary: there’s no getting around or out of the body—not til the end. The central character dies repeatedly, and is each time revived by a hypothetical and redemptive “What if…” chapter. The miraculous simplicity of the intermezzos makes quick work of cheating death in order to return the reader to the complex and careful story of narrow and narrowing survival.

The twentieth century corpse parade, as viewed by this woman, reminded me of Bill Callahan’s sharp summation of the collective modern warmind:

“I’m not saying we are cut from the same tree, but like two pieces of the gallows…we share a common dream: to destroy what will harm other men” (from the song “My Friend”).

The ironic futility of destroying an already-so-fragile body is apparent in many of Erpenbeck’s refrains, my favorite is the phrase: “gone to seed.” A version of the intermezzos’ perpetual question “How could it all have gone differently?” is suggested more and more by the repetition of this phrase about surviving just long enough to germinate: as if!  This is gallows humor of impeccable and patient design.

Bernofsky’s translation cuts finely along these lines, divinely aware of the devastatingly ambivalent powers of the mournful punch line, attuned to the body’s simulcast channels of tragic and comic. Knee-slapping and bucket-kicking are drawn brilliantly in single strokes, just as subtly when the translation nimbly recreates the often incantatory construction of the German.

“No one can get up and look out—the dead windows retreat before their eyes in two rows, growing narrower as they recede, impenetrably sealed.”

Notice how those final two clauses do the heavy lifting for the “dead windows” of a hospital’s terminal ward. Now, I can imagine how this novel (especially in excerpt) might seem more gallows than humor. So let me, if it’s possible, try to recite and unpack one of the many dreadfully funny long-cons Erpenbeck and Bernofsky meticulously create.

What I initially read as one of the novel’s most heartbreaking tragedies is actually its cleverest yuck. A son to an elderly mother with a slipping memory unknowingly encounters, while alone in an antique shop many years after the war that displaced his parents and grandparents, two long lost family heirlooms. Just tchotchkes to him–a slightly used set of books, a novelty clock—these potentially restorative sentimental objects are cast aside in favor of a joke gift: a painting he thinks his mother might find mildly humorous. What a gag it is: the tragedy of the missed opportunity to restore a small part of the family history and, possibly, his mother’s memory. Two totems of suffering and perseverance are left on the shelf to mean…what now? Very little? Robbed for the final time of their memorial value, do these objects experience an essential change? A clock is just a clock, except when it’s not. And the complete works of Goethe, modestly used? In a book where a turn of phrase is given power over a tock of the eleventh hour, the written word only ceases to mean to those who cease to be. For the family dear to the departed, the only ridiculous responses the body can manage are laughter and tears.

It’s an out-of-body experience between two covers. For a few hundred pages that cover just short of one hundred years, Erpenbeck and Bernofsky operate in sublime territory. Even if death is the final word, language as alive and imaginative as can be found in The End of Days invariably has the last laugh.