A Conversation Regarding Jeff VanderMeer’s Wonderbook 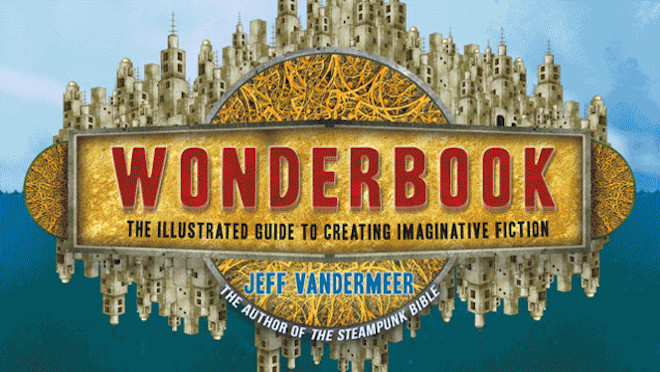 Toward the end of last year, Jeff VanderMeer released Wonderbook: The Illustrated Guide to Creating Imaginative Fiction. It is, without a doubt, the craft book I would most quickly recommend without reservation. Whimsical and informative, lush and exact, Wonderbook does a brilliant job of offering something for writers at every stage of development. For the extreme novice, it can act as a primer of sorts—offering introductions to every conceivable literary element. For the more established fictioneer, the book functions as a sort of reminder of the kind of verve and pleasure writing can afford.

Beautifully illustrated, brilliantly organized, and coming from a space perfectly balanced between the fantastical and real, Wonderbook is the finest craft book I’ve ever laid eyes on.

Currently, VanderMeer is in the midst of a rugged publication schedule—FSG will be releasing his Southern Reach trilogy over the course of this year. However, he was kind enough to make time to answer a few questions about the aims and arguments of Wonderbook.

Brian Allen Carr: Wonderbook is the most visually appealing craft book I’ve ever seen. I believe, in an interview elsewhere, you sort of referred to it as a kind of “coffee table” book. Was your intention with Wonderbook to produce a kind of text that would entice casual readers—say someone who chances upon Wonderdook sitting on a coffee table—to become writers? Or, did you have a specific kind of audience/result in mind?

Jeff Vandermeer: It’s meant to appeal to beginning and intermediate writers, with some more advanced-level material thrown in. It takes as its default non-realist fiction, unlike most general writing books—and then integrates into that instructional images on just about every page, most of them commissioned for the book. But I have seen musicians and people in other creative disciplines talk about how it is useful to them as well. A fair amount of the material is about inspiration and creativity. My mother is an artist and I grew up around art and art studios. I’m also very visual in my fiction, and it seemed like an interesting idea to create the world’s first fully illustrated creative writing book.

BAC: You refer to Wonderbook as “nondenominational,” which is a concept that I love. I wondered if you couldn’t speak both to the meaning behind this term as it is used here and, perhaps briefly, the sort of rift which has made the term “nondenominational” necessary.

JV: There are a lot of different turf wars and tribes in fiction, and I find it a real waste of energy to argue in such terms or to think in terms of this or that when most good fiction has a lot of different things going on. To put it bluntly, I’ve never really give a good goddamn whether something has a dragon in it or not, and I don’t understand people for whom the dragon or lack thereof is worth having pitched battles about or rendering certain texts invisible. So Wonderbook repairs one rift by not being a “SF/Fantasy” writing book but a general writing book in which many examples fall far south of the mimetic, even though someone who writes in a very realistic mode will find the book of use as well. One of the misconceptions that tribalism spreads is that there are tons of specialized protocols specific to any particular genre, and that writing books should take these into account. When, in fact, technique is itself nondenominational—tools that the writer decides how to use depending on the kind of story they’re trying to create. And it’s nondenominational in ignoring accidents of birth as to where something of quality originated. So, for example, Stant Litore, who started out self-publishing e-books is in there alongside Brian Evenson, a writer and creative writing teacher at Brown, and Angela Carter is right beside George R.R. Martin, Amos Tutuola, and Kelly Link, not either/or.

BAC: Moving off this concept, you refer to yourself as a writer as having a kind of dual citizenship in both the literary/fantastical camps. Others who have, historically, benefited from a similar placement predicated by their versatility are writers such as say Edgar Alan Poe, Kurt Vonnegut, Joyce Carol Oates, etc. But what deeply interested me about your very correct, self-identified dual citizenship is your remark about coming to the duality “honestly,” and I wondered if you couldn’t speak to this concept of honesty toward the two traditions and what that means to you.

JV: It just means that I can be no other way. I’m not trying to be one thing or the other, but both, while understanding that different people in the book culture speak in different languages. So I’m not invested in any identity other than “fiction writer,” and one who happens to lean toward the more fantastical and surreal side of things. To me, honesty means not just trying to impose my own “language” onto readers or other people in the book culture, but learning to speak their language. I also see so much cross-pollination out there, and so many writers who do more than one thing that it seems laughable to think in terms of binaries, or to cling to the catchphrases and buzzwords of any one group. This means, I think, that sometimes people believe I’m being too situational or that I’m not consistent in how I talk about my writing or how I self-define, but to me consistency is overrated and not always particularly useful.

BAC: There are many lush, visual renderings in this text that work alongside the essays, guides, and anecdotes to support and enhance the experience of Wonderbook. There is a brilliant visual mapping of the history of science fiction as well as a highly entertaining sort of maturation map that establishes the lifecycle of a story. One of my favorites is titled “Stages of (Fantasy) Writer Development” that depicts a fantastical critter crawling out of the evolutionary ocean to inhabit one of four periods in progression–Embryonic, Transitional, Intermediate and Advanced. You make an intriguing observation in characteristics that separate the intermediate from the advanced. I think in some ways counter intuitively, you argue that the advanced writer, as opposed to the intermediate writer, is more ambivalent toward “adverbs and heroic speeches,” and I wanted to see if you could sort of discuss ambivalence, both in this regard and in the greater idea of writing, and how, in some ways, ambivalence can be a positive trait.

JV: Well, that Stages diagram is meant to be a little bit funny and wry, but you’ve latched on to the bit that’s deadly serious. The fact is, as you learn more of the art and craft of fiction writing, it’s often harder to figure out how to write a story because you have many more possible ways because you have more experience. So you can actually become less sure of yourself, less certain. Certainty, like consistency of self-definition, is not always to be desired in fiction writing. One reason that a beginning writer should be wary of adverbs and heroic speeches, as emblematic of all kinds of other elements in fiction, is that the beginning writer is more likely to botch the uses of both—or to misunderstand the context in which they work. For beginning writers, although I try not to be absolute myself, saying “I’m going to cut a third of all adverbs from my stories” is a useful mechanical way of learning how they work—a banishment that suggests an eventual return from exile at the right time. The advanced writer isn’t as likely to fall for advice that’s absolute, and also knows better than to make general pronouncements about anything—and, hopefully, has enough mastery to make things like heroic speeches work, in part because you’re hopefully always thinking “yes, but” when considering any admonition about any aspect of writing.

BAC: Finally, I’d like to kind of ask about the Southern Reach trilogy in regards to your work on Wonderbook. This year, you’re putting out three books with FSG. The first, Annihilation, is already available, and the second, Authority, is out very soon. It’s an ambitious publication schedule, and, I can only assume, that there was some overlap of your working on the trilogy as you worked on Wonderbook. I’m kind of curious if the two works didn’t in some way inform each other, and I wonder if it wasn’t hard to produce a craft book at the same time as such a big fiction project. Did it ever force you to over think things? Did it bungle you, ever, too deep into your own head?

JV: Wonderbook was already written by the time I was working on the second and third novels. The overlap was about the layout and acquiring images, since I oversaw all of that—acted basically as the layout supervisor and the art director. That’s a kind of overlap that’s just fine—didn’t affect anything on the novels. If I had still been writing Wonderbook, it might’ve been more difficult. What I think is a little funny is that when working on Acceptance, the third novel, I did consult Wonderbook at times. There are a lot of features by other writers in it, and sometimes in writing about the craft and art of writing, you don’t realize how something might apply to your current novel until you see the advice in print. So every once in a while, I’ll dip into the structure and characterization chapters if I was puzzling over some scene or situation. I found it very helpful!