A Review of Hilda Hilst’s The Obscene Madame D 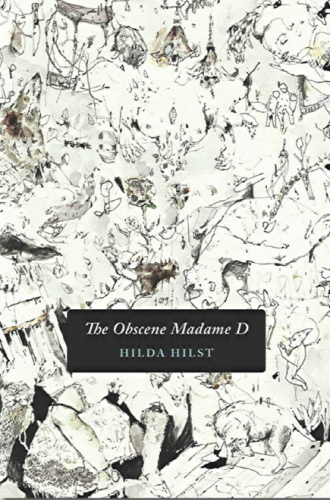 The Obscene Madame D
by Hilda Hilst (Translated from the Portuguese by Nathanaël
in collaboration with Rachel Gontijo Araujo)
Nightboat Books and A Bolha Editora
57 pp, $14.95

Alt-Lit Divas: be not afraid. I come bearing good tidings. In academia and mainstream media, we are constantly being presented with literary rubrics from which we are locked out; but the world, like Death, is different from what we supposed, and luckier. Therefore if we attentively comb through the literatures of other cultures, occultly presented to us by indie presses and at the hands of provocative translators, we just might find ourselves exposed to an alternate and inverted set of art-heroes, an ‘alt-lit’ landscape that upends and distends our own. To that end, I give you the Brazilian wonderworker Hilda Hilst, and her first English title, The Obscene Madame D.

1.  THE AUTHOR AS AN EXTREME LIFE FORM

Imagine one of those miraculous life-forms that live in hydrothermal vents at the deepest part of the ocean, an organism of the category extremophile, gifted with snail’s feet or red plumes or a host of delicate tubes, an organism thriving on poison gas at pressures greater than we surface-breathers could ever conceive.

Now imagine that this fungible form were simultaneously discovering itself, holding a self-contrived microcamera on itself, discovering more and more of its own fantastic muchness in close-ups and cutaways, unfolding pleated vistas while keeping always within its own tight parameters. This combination of alien ingenuity, cruel compression, brilliant expansion and a diet of steady delight characterizes the 57-page prose flourish that is The Obscene Madame D.

2….  BUT SHE RUINED HER CAREER TO MAKE PORNOGRAPHY FOR CHILDREN!

The Obscene Madame D represents an incredible, life-changing pleat in the career of its author, the legendary Brazilian one-off Hilda Hilst. Hilst produced a steam-tide of widely celebrated poetry, drama, and prose for some thirty years before jumping to a still more extraordinary level, a shining, smoking and considerably more provocative orbit, for the second half of her career (including, for example, what the author called ‘porn for children’). The Obscene Madame D provided the portal through which this jump could be made, as its daredevil title suggests. It is thus a particularly florid and wonderful book with which to introduce North American readers to this titanic and infernal author.

3.  WAITING FOR THE PIG CHILD

This book exists within a single plot point—our heroine, Hillé, has confined herself to a cupboard-like chamber under the stairs. With only one point, the plot sustains not a cause-and-effect but rather a spatial logic; scenes and conversations register audibly, marked by their proximity or distance from this critical no-place, this hole. Hillé has a husband, Ehud, who perhaps died some months before but whose coaxing conversation goes on posthumously seducing her through the ether, so that the seductions construct a new orbiting ‘spacetime’ of their own. Neighbors are also (comically) heard through the wall attempting to communicate with the ‘shut-in’ who has literalized and thus scandalized that term. The most important recurrent figure is the Porcine Child who is continuously described, whose arrival is so passionately awaited, who will usher into the hole-world not transcendence but a child’s frank occupation via ether-collapsing obscenity. In this sense, the word  ‘obscene’ in the title feels aspirational, a status our heroine will achieve only through the lyric eviscerations of the last few pages.

But first we have Hillé, Hillé herself. One of the book’s exciting (and inciting) recurrent modes is that of self-litany, a rhythmic, substitutive naming that brings our protagonist into being with the multiflorate force of a Hindu goddess. The book begins by describing the abnegation that is the beginning of a limitless, lawless, filling-back-up:

I saw myself removed from the center of a thing I didn’t know how to name, but this is certainly no reason for me to go to the sacristy, I, Hillé, incestuous theophagite, also known by Ehud as Madame D, I, Nothingness, Name of No One, I in search of all things […] Dereliction, Ehud would say, Dereliction—once and for all Hillé—signifies abandonment, neglect, and why do you ask again each day and you never remember, from now on, I will call you Madame D.  D for Dereliction, do you hear? Abandonment, neglect, my soul forever in constant emptiness, I sought after names, I palpated angles, nooks, I caressed hems, looking inside, go figure, curls, wefts, twists, at the bottoms of trousers, in the knots, the visible quotidians, the insignificant absurd, in the minima, the light one day, the understanding of us all destiny, on day I will understand, Ehud

I quote at some length here to bring out several characteristic structures of the book, evident even in this very first paragraph. One is that the book proceeds by paragraph. Paragraphs are its delightful units. Whole liquid thoughts announce, move through themselves, double back, repeat in paragraphs. The effect is concentrated and effluvial, a self-conserving system which displays its riches like waste on its wide banks.  The book is also thus cyclical. In the above paragraph, the voice picks up “Abandonment, neglect” from Ehud’s dialogue and uses it to relaunch its thought. But rather than listing her various names, the speaker now narrates this process. She says “I sought after names”, then re-trains the searching, phrasal energy of the opening sentence not through proper nouns but through utterly common things, minor sites on the larger geography of bodies: “figure, curls, wefts, twists, the bottoms of trousers”, etc. This cyclical, rebounding energy thus fuels the book’s logic of hyperbole, its ability to move between the hilariously concrete and the murkily obscure (the obscene’s two modes), from minima to maxima, from the mundane business of “knots” and “hems” to “all destiny”—and back again. This motion is the book’s engine, because pursuit of minima always directs us back to the maxima, and vice versa. The book’s metaphysics are thus firmly rooted in this world, and cannot leave it. The Porcine Child, when he comes, will have to come to this cupboard under the stairs. He will have to come here. To Hillé.

4. HELL IS OTHER PEOPLE

For all the radical force of Hillé as the black smoking hole at the center of this book, the opening paragraph also reveals another key structure: the book exists in dialogue. Ehud the bridegroom, there-and-not-there, is not an antagonist. He surges, he touches, he comes close, he brings descriptions of the outside world, new textures and objects into the book’s imagining. He is the necessary prod for Hillé to feel and to fill out her own outline, including the outline of her thought. Other figures’ dialogue is more comic, such as the neighbors who tread into Hillé’s precincts in order to have the pleasure to scorn her, or the priest who is easily scared off the place. For all the humor of these set pieces, I found these cameos by other human voices necessary. For while Hillé prays in the book’s last line to be delivered from “imbeciles and cretins”, the imbecility and cretinousness of the neighbors is also part of the Porcine Child’s brief. Obscenity needs bodies, familiars, the neighbors. Hillé says,

I contemplated this pig-world and I thought to myself; He has nothing, That One, but nothing to do with this, This One inside has nothing to do with this, This-One, the Luminous, the Vehement, the Name, I ingested deeply, salivating, licking my lips I demanded: make it such that I understand, that’s all. Really, Madame D? Understand the play-thing of the Mad Child, just imagine, Hillé, or imagine the sinister pastimes of a mad child, or imagine children playing with little cats, rats, with sad errant bitches, come to me, oh, little children, what do we know of little children? How could he speak like this, he who said he knew so many things?

House of the Sow, that is what they call my house now, I am now the wife of that Porcine Child Builder of the World.

In this passage, Hillé wants to be declarative, Vehement, to conceive a Vehemence, and to be its wife. But Hilst won’t let her have this declarativeness. Immediately a voice (Ehud’s?) answers and complicates the thought, suggesting that boundaries and binaries cannot be so firmly drawn, and that if we imagine a messianic arrival, we must imagine not a purely alien or even strictly animal apparition but something circuited, for better or worse, to all the cruel and lovely obscenity of human organisms.

The Obscene Madame D is thus not a fixed thing, not a tract, not the end result of a course of thinking but a marvelous irruption, a salvo, the opening of a series of possibilities which would occupy Hilst for the remainder of her career. The poet Nathanaël worked with series editor Rachel Gontijo Araujo to create this translation and the result is fittingly double—on the one hand musical, shapely, with an emphasis on phrase and, on the other hand, hot-blooded and direct in tone. The resulting text is complex and fully saturated like bloody butcher paper. And satisfying, too, like the lick of that butcher paper Madame D might dare us to undertake.