More Than Love: A Review of Bound: An Ode To Falling In Love 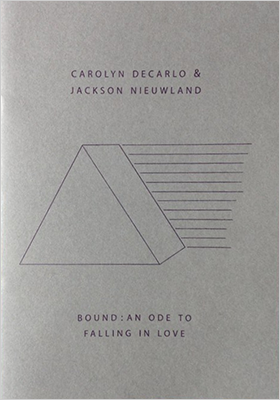 In the future (which isn’t too far off now, about fifty years or so, I’d guess), the scientists of the world will study love. Love will be the only science left to discover anything new about. The oceans, space, time, all things macro & micro, will have been measured & graphed, understood to the nth degree. But love will still mystify. Carolyn DeCarlo & Jackson Nieuwland are (will be?) two of those scientists. Their book, Bound: an ode to falling in love, is a ferocious hypothesis in this science, & we are lucky enough to be able to read & devour it now, here, in our clueless present.

So how do these two go about love? What is the focus of their study? Because, of course, love wants to be studied en masse, in as wide a group as possible. To keep love far-reaching is to keep it mystical. Love is just, a thing in the air. An element. A thing which doesn’t need to be quantified. Or so it wants us to believe. But DeCarlo & Nieuwland are good scientists. They focus on what might be the most recognized pairing of hearts in history, &, miraculously enough (or maybe not), it came from our own time: Kim Kardashian & Kanye West.

But we, as readers trapped in our present, do not know everything there is to know about this couple. The Instagram likes. The Grammys. The gratuitous tabloid covers. We see them everyday, everywhere, & we think, perhaps are tricked into thinking, that we know them. That we understand their love, & in doing so, our own loves. We form opinions about them as a means of deflecting opinions of ourselves. We contradict. & all of this, as DeCarlo & Nieuwland point out, is all part of how love works.

All irrelevant information when it comes to love. In fact, this book starts with an hypothesis that we, us, the present have no way of currently asking: that Kanye West is more than human, & perhaps, more than the present (though his presence, of course, remains a present). & yes, some of us may be quick to write this information off as an easy explanation for behavior of Kanye west in this past decade, but to do so would be wrong, & disrespectful to both the scientists of the future as well as the heart Kanye most certainly has. To me, this achieves the opposite of an easy explanation, & instead brings more questions to light. How long has Kanye been here? Where did Kanye come from? Is Kim more than human? Or is she simply the most human?

They mistook the wreck for a crashed car

and me for one of them.

They wired my remains together

in an imitation of their own shape.

—from “You supposed to drown”

This book narrows its focus even more by never stepping out of one song, which Kanye wrote for Kim, “Bound 2,” from his recent & controversial album Yeezus. This song is an excellent example of the mystery which lies between the past & the future. Using samples from the Wee’s “Aeroplane (Reprise)”, from “Bound” by Ponderosa Twins Plus One, and the line “Uh-huh, honey” from Brenda Lee’s “Sweet Nothin’s,” West ends an album of most distorted & unsettling sounds which could only have been brought from out of this world / time, it seems like a landing, perhaps literal, perhaps not. & what else could make a person want to stay on a planet, in a time, more than love?

I’m an expert at leaving things behind,

on cutting ties, on smooth exits,

but you never left my side

—from “No leaving this party with nobody to love”

None of this is to say that this book solves love. The writings in this book seem to serve as evidence for the power of love, & its incredible unknowability to the people (& otherwise) as of the year 2015. & sure, we have an idea of what love does to us, but we have this idea that love transforms us. But we only see this as a metaphor, or as an emotional transformation. Powerful, yes, but not tangible. Well, this book is here to correct that idea. Love transforms emotionally, but also, physically. Kim & Kanye’s journey, as will soon be shown, is proof of that.

I was a room full of objects waiting to be compressed.

Lift up my body and place the swell of it upon a million feathers,

unravel the folds of me across the Pacific Ocean.

I was massive. I wanted to be weightless.

—from “Watch your mouth”

A result of love (or perhaps the transformation brought on by love), but by no means a requirement of it, is a child. Love sometimes, most times, wants to inhabit as many forms as possible. For Kim & Kanye, one of those forms is North. Her name, no accident. The opposite of her father falling to this planet. Her mother’s rise to fame. A direct combination of the things which made love entwine her parents. A transformation, again.

and you became human again.

She had your skin,

your nose, your cheeks,

your lips, your hair, your speech

but I could see myself swelling underneath.

—from “One good girl”

Every morning, North woke me up and told me she loved me.

—from “Only here for her girl birthday”

This book, this transmission from the future, ends. Though we, as readers, don’t know if the end of Kim and Kanye come with the end of the book. We hope Kim & Kanye live and live and live, perhaps well past our own lives. And if not, that North, their love, does. DeCarlo and Nieuwland have achieved what any great scientist is supposed to achieve: an illumination of the past that benefits the present, & carries us, somehow, into the future.

Bound: An Ode to Falling in Love (2015) was written by Carolyn DeCarlo & Jackson Nieuwland, & re-remembers the authors’ own courtship through that of “Kimye”. It is available from Compound Press.