A Review of American Innovations by Rivka Galchen 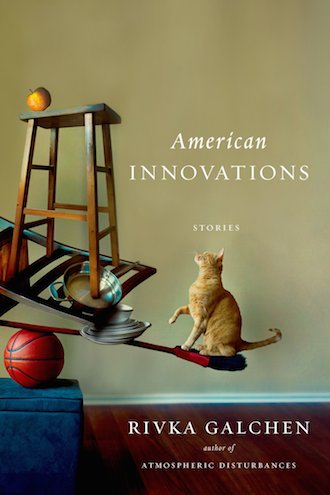 I like American Innovations by Rivka Galchen because when I picked it up I was like, “Uh-huh, baby has to have it” which is a line in “Poemland” by Chelsey Minnis. By the way, when is “Poemland 2” coming out? All of a sudden I feel very concerned for Chelsey Minnis. Is anyone Facebook friends with her? I just checked Facebook. Chelsey Minnis isn’t on facebook. The only recent mention I could find of her was in a review of Patricia Lockwood’s MOTHERLAND FATHERLAND HOMELANDSEXUALS. Uh-huh, baby needs some of that too. In the review Minnis is compared to Lockwood. The review seems to be about how “bros” are stupid and should kill themselves which is a pretty good retirement plan. Business idea: an investment firm specializing in training college “bros” how to kill themselves. Don’t even bother leaving a jar of “bro” sperm behind. Earth and human life should continue on fine without you.

To be honest, we should never feel sad when a white man dies. A few weeks ago, a white man named “Robin Williams” killed himself and everyone got really sad. Instead of getting sad, I think we should have been like, “Hey, good job. Thank you for clearing up some more space for the ladies and the non-whites.” Whenever a white man dies I’m reminded of the famous line about how the only good white male heterosexual is a dead white male heterosexual. Of course, it’s not that simple because every time a white man kills himself everyone is like, “Hey let’s talk about the guy who doesn’t exist anymore until the whole world becomes more sad than it was earlier when we weren’t talking dead white men for so long our teeth fell out. Anyway, I’m sort of a “bro” too so I should probably kill myself for the good of society, but I’m trying my best not to be a white person anymore if that’s possible and if I could I would sex Tom Brady until the NFL stopped existing…

Hmmmm I am doing a very bad job of talking about how much I like American Innovations. I guess this review isn’t really going to be about the book which is sort of the same dumb thing I always do when I review stuff. I did read two and a half reviews for this book. Each of them seemed to be doing the same thing. They were all like, “Wow, Rivka did the female versions of all our favorite male short stories neat wow good job Rivka.” One review in the New York Times even said she’s “Like Hemingway writing about fishing. Or Scorsese mythologizing lowlifes. Or Bob Dylan releasing an album’s worth of cover versions and calling it “Self-Portrait.” And earlier in the review she was compared to Woody Allen. I’m surprised they didn’t staple Updike’s penis on the cover of her book and then be like, “This book is cool because it’s has a dead white male’s penis stapled on it.” Anyway, if you’re interested in reading the full New York Times review, I’ve pasted it below:

The stories in American Innovations aren’t stories because wow can you believe it’s been so long since Galchen’s first book came out. What is wrong with her? Did you know Galchen does teaching and makes me “he he.” She is very imaginative and often funny!!!! Imagine, a woman being funny#$@! But why are her plots so minimal and unusual? Who is that stupid suburban dad who did unusual things in his plots. Anyway, she’s so weird. One story is about time travel and another is about talking furniture. It’s like she’s the Bill Clinton version of Stephen King if Stephen King was David Sedaris, only wearing Garrison Keillor’s face back when Keillor was still trying to date Cormac McCarthy’s pillow because it was made from the skin of Roberto Bolaño’s dead body.

Oh boy. I really did something there. Now everyone is pointing at me and like, “That boy is criticizing the New York Times, but isn’t he sort of doing the same thing he’s criticizing? I mean is it really any better to talk about people talking too much about men? Isn’t this like the same thing? So far in his review he’s just made fun of ‘bros’ and how they’re always saying, ‘Hey do you want to read about the time I was white and sexed some shit with my penis so hard they gave me some goddamn trophies bitch don’t make my dad cum thirty years ago at the moment of my conception please instead make him do a rainbow from his dingy so my skin can be rainbows and I don’t have to be the same stupid dead white heterosexual when I die that my dad will be when he dies.’”

Anyone who bothers to read this will probably be like, “I wish he would shut up and just talk about the book and why does he keep saying the word ‘like’?”

Maybe I will try talking about the book. Like most books, American Innovations by Rivka Galchen started with a sentence. The first sentence was: “I was at home, not making spaghetti”. This line feels both careless and insanely constructed which is why I like it. I sort of want this line to become my canned response whenever someone asks what I did last night. Her writing has that literature bent without feeling capital-L literature beating everyone over the head with how literature-y it is. I felt very refreshed while reading. Deep on the surface of the writing there is a confused beauty that makes me do tears. The teardrops remind me of this white guy I once knew who died. I think he picked up a rifle and got killed somewhere. Good job white guy.