A Familiar Cruelty: On the Work of Ed Atkins 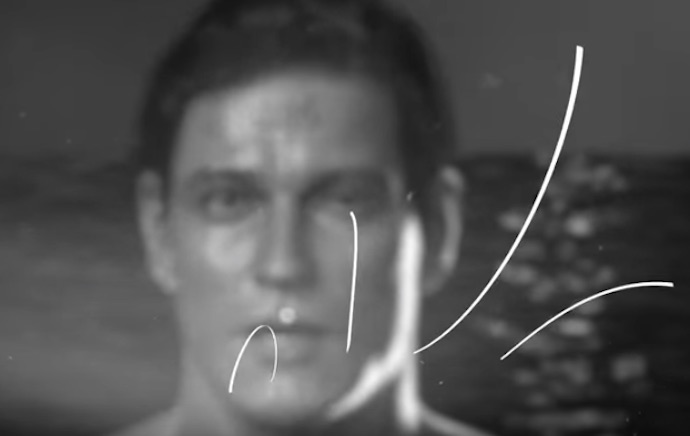 It’s 3 AM and I step outside for a cigarette. My knees wobble under the harsh white light as I deeply inhale. I’ve been living in a basement for the past two weeks, and haven’t talked to anyone else that lives here in more than half of that time. I just finished watching episode eight of the Twin Peaks relaunch, in which demonic Black Lodge entities arrive on Earth in sync with an atomic bomb detonation test. Penderecki’s “Threnody to the Victims of Hiroshima” is utilized to hair-raising, psychedelic effect. A mutant frog insect crawls into the mouth of a sleeping girl. Most of the episode unfolds in Eraserhead black and white, and under this light, the world around me seems equally monochromatic, purgatorial, voided.

I can’t tell if I’m re- or de- toxifying myself; all I know is that the toxins are there, right up against me. At night the white security light stays on outside the back door, and it slivers into my room through the blinds of a tiny window and cuts across my face. I sweat profusely and forget to hydrate. The only other source of light is the cool illumination of my Macbook screen, which stays permanently charging and within arm’s reach.

I chase Ed across the internet. From shaky iPhone bootleg recordings of European installations to brief, minute long teaser trailers, I wander the despatialized corridors of his work’s documentation.

In Ribbons (2014), an animated male figure, naked from the waist up and scrawled with graffitied language, sings an impromptu dirge. The voice, which I assume to be Atkins’s own, is slippery to dissect: emotive and vulnerable, yet brittle and ironic at the same time. “Scarecrows dressed in the latest styles,” he croons. A YouTube commenter writes: “david sylvain and gilbert sorrentino vibes.” The figure lays his head on a bar, surrounded by drained pint glasses. His upper body slowly deflates. The cigarette clenched in his fingers burns down to the filter: a miniature pillar of ash. Atkins’s avatars puncture and parody the concept of a figural ideal. His characters are monotonous, blanked out, somnambulist, depressive, and deeply epistemologically flawed. If his videos are to be seen in part as studies of the male form, Atkins is far more interested in exploring the derelict nature of a psyche than the figuration of a body.

Atkins’s nameless men serve as vessels for renditions of his poetics—not unlike the mouth in Samuel Beckett’s Not I, alit by a single spotlight, small and menacing on a black and vacant stage. Similarly, in Happy Birthday!! (2014), a well-dressed figure, having emerged from the depths of a seemingly endless black ocean, lists off random dates: “It’s 2006, and I…just…the scene…it’s set…2006, June 2006. April 2006. June 2006. Previously 1984. Previously 1872. 1872. It’s June 1872.” Atkins’s figures navigate time in a precarious and jagged form, similar to the figures of Beckett’s plays for television, Quad I&II, with their intermission lasting 100,000 years, or the laconic floating heads of his final play, What Where, where implied torture occurs in a sardonically absurd non-place.

Ed and I, we’re both obsessed with text. His work is just as informed by poetry (and theater) as the history of video art. At odd intervals, explosive graphics and strange anti-memes writhe, unfurl, dissolve, and soar across the picture plane. In Ribbons: “A DEMAND FOR LOVE.” “REBUTTAL!” “LACK.” “WHERE I MET YOU, X.” Are these texts overly cryptic? Is a hidden message convoluted within the baroque structures of his visual effects? Then again, it could be simple heartbreak. I equate it more to the poetry of waking yourself up at twilight, utterly alone, having shouted a random phrase from an immediately forgotten dream. The glitch is a portentous thing that can only be, paradoxically, engaged with and erased by returning to slumber.

Harsh sound editing, mostly comprised of recognizable stock sound effects, is employed to add to the intensity of the screenic claustrophobia. The severity of these rapid fire sonic exchanges anxiously meld the sounds of commercial muzak, computer jingles, and shell casings falling to the floor, all flatlined in the spiraling hurricane of Atkins’s collapsed universe. There is an airtight logic to these audial compositions, and Ed’s mellifluous voice pastes it all together, sticking to the inner corners of my mind: a troubling vocal adhesive.

Lense flares, dust motes, and other filmic anachronisms situate the videos within an unstable time in the history of the moving image: they demonstrate awareness of their digitality while engaging the vocabulary of the past, which inscribes an eerie sense of failure across their bleak surfaces. Focus shifts in and out, transmogrifying visibility to panting breaths and hurried actions, such as liquor (or urine) pouring into a glass with frantic, jerking movements. Occasionally, smoke and haze will fall on the environment, hiding the figures behind another, more diffuse interface, more diaphanous than the one through which the performances operate and become seen by us, the viewer desperate to draw conclusions about all of this strangeness. To me, it is an uncanny valley that becomes exponentially familiar with each passing second, more real with each glance I steal from my smeared screen.

In the stares of these men, computer-generated and designed through motion capture software, the emptiness of a thousand unopened Instagram stories is embedded. Even when two figures embrace, a sinister distance encapsulates the scene with looming dread. There is something drastically impermanent about these attributeless figures, who seem as though they could be ventriloquized by anyone for whatever means at any moment. It begs the political question: what (or in this case who) constitutes a template? Their very presence—grimacing, close-sheared men, all white, most undressed—emits an ambient violence. A queer unheimlich informs this homosociality. In Us Dead Talk Love (2012), there is discussion of an eyelash found beneath a foreskin. I cringe, toss and turn on my floor-bound mattress, wondering: how many foreskins between me and the last one? The eyelash becomes a rose in my mind. The eyelash becomes a worm. It is constantly replicating within itself, and phalanxes of Atkins’s figurations watch coolly. I miss another sunrise.

In one way or another, in what I know of the work of Ed Atkins, “time passes.” In which direction it is going, and how fast, is left for the viewer to decide.