A Dollop of Puerile Fireworks: On the Suicidal Squad of David Ayer 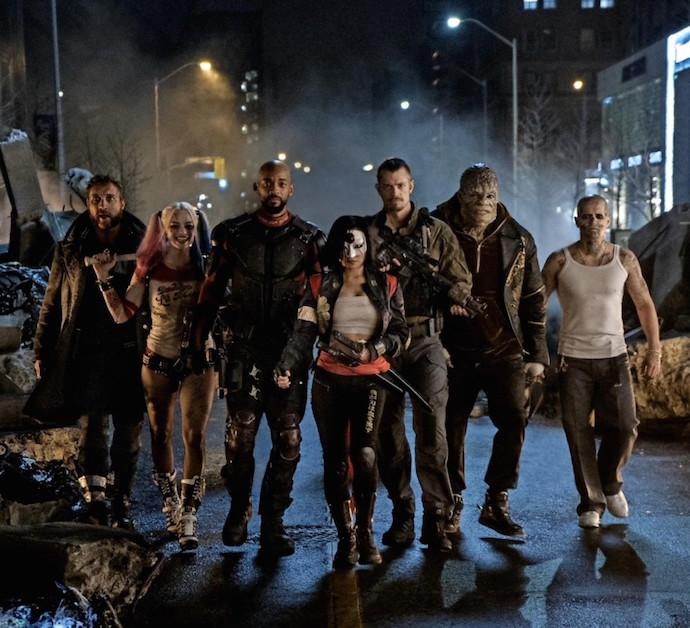 Enough is enough. It’s time someone told Hollywood what a ’villain’ in a superhero movie adapted from a cult entity like DC Comics looks and sounds like. I mean, if flat unimaginative one-liners and immersive clouds of inane GCI cut it, I refuse to be part of the charade. Because ultimately that’s what I brought home with me after the screening of David Ayer’s (Training Day, Fury) tale Suicide Squad, a striking notion the film could be nothing but a parody of sorts allowed to meander along the rails of egomania. Not that it didn’t have alternatives, though. The possibility of an allegory of the popularity contest American politics has become seemed more than coherent. And a cautionary tale of how the American Government ate its own tail by providing ammo to the world’s future enemy far too wise for the connection not to be made. Still, however giddy either may have made me feel, I now realize how that muddled display of characters could only work as a stunt if and when in conjunction with an NC-17 rating and an actual premise. And seeing how it has neither, I have to let bygones be bygones. Too much was in for a flashy cinematography and Jared Leto’s acting loudness, after all. Too many mouths wasted speaking of the possibility of an exciting good superhero film doing the improbable, making a smash at the box office (which will do, regardless). But there are no miracles and it is far tougher to fix the cracks already established since Tim Burton and Nicholson’s Joker than to put a stress-induced screenplay together for the ultimate fanboys and diehard mall rats. That said, not all is Ayer’s fault. Yes, the man who pulls the trigger is locked away for the crime committed, but let us not forget the weapon used for the effect is also seized. That should tell us something, shouldn’t it?

In a world turned to shreds post the Superman and Batman glow, a group of villains is turned into blackmailed agents by antihero government agent Amanda Waller (Viola Davis) when a witch, Enchantress (Cara Delevigne), is adamant in taking their world as hers. By the name of Suicide Squad and like most superhero movies out there, these exciting conceptions of beings may have been let go of their electrocuted jail cells, but remain very much trapped in the formulaic World War III going-back-to-high-school parades they are faced with. One-dimensional puppets under Waller’s command, they are to create a hyper-sexualized aggressive pile of nothing–even Ben Affleck’s cameo as Batman helps out there–but fireworks and cinematic gazes of inflicted power while attending to their own performances as the “bad heroes,” the immoral vindictive monsters who can fathom forgiveness and feel defeat, love, repent. All the while, the tale is running its course. The world needs rescue, the underdogs are presented one by one and very scruffily so (no time for more, is there? wouldn’t want to bother anyone with more backstory), and Friday Night’s America’s Got Talent begins. Guns, explosions, pretty ‘pretty lights’ as Harley keenly remarks, a damsel in distress planted somewhere in there, a crazy super villain immune to bombs and machine guns bound to come back to ruin everyone’s lives, and the basics of psychoanalytic traumas always one step away from a weeping therapy session. There we have it, in a nutshell. With or without a group of agents of chaos, textbook or otherwise, the film would still be a self-indulgent display of seemingly juicy characters with very few high standards, henceforth making sure once the hollowness of the high-priced genre sucks you in and spits you out, nothing but regret (for that ten-dollar ticked you shelled out) will remain.

Looking back, there were only two scenarios one could go with. Either make a film with look-alike real caricatures of the comic heroes with only flashbacks and voiceovers to rub together on the big screen (which Ayer did), or someone seriously needs to give Christopher Nolan another pretty sweet deal. It wasn’t enough to suffer through the cringing Batman v. Superman, now we have to deal with a united force of the “meta-humans” they had arrested in the first place? Suffice it to say, as storytelling goes, there is nada to see there. I could even venture that there are over five possible endings in that disjointed unseeded extended trailer. And neither one of them does what it is supposed to do, gives us a purpose to this story and consequently a reason to stick around. I mean, does the world need saving at all when you have Viola Davis slaying it on screen? Does it?

Regardless, they are always upsides to every sad story–and even if there aren’t, let’s make some up, shall we? Screenplay abilities aside, it’s the cheap thrills and caramel popcorn people come looking for, and Suicide Squad does manage to equate a couple of fair sadistic moments in this regard. Viola Davis leading the best one in the film, and Margot Robbie exposing the promise of a Harley we were not properly allowed to take a look at. Brooklyn-accented Harley Quinn may be the most wasted performance of this terrible year for film. She’s been told she’s the XXL-crazy version of Joker but Robbie knows better, she makes Quinn fun, cheesy and entertaining! Basically the descriptive meaning of the word ‘blockbuster’, in all the big audiences are concerned. Her boyfriend Joker (Jared Leto), on the other hand, an icon told and retold visually over the years, turns out to be a childish tantrum-induced egomaniac with a skilled hand at dying his hair bright green. Other than that, I suspect that in the absence of his ‘Damaged’ forehead tattoo and threatening gaze he would be as defenseless as any ordinary civilian walking down the street. And that laugh, that laugh really is a cry for help. What was Leto thinking? More quickly does Robbie’s obscene giggling come through than his overthought melodic chords from hell. Also a part of the squad are an Australian thief with a boomerang (Jai Courtney), a Mexican gangster with pyrotechnic abilities who destroyed his possibility for happiness (Jay Hernandez), and a man-crocodile (Adewale Akinnuoye-Agbaje) imparting humour, vulnerability and just plain alienness respectively, for the mere sake of their being a variety of members, without any dire sense of highlighting them. Commanding the troops is the never disappointing Will Smith as Deadshot, who dictates a stylish five-minute dialog to Rick Flag (Joel Kinnaman), the member of the Task Force X told to lead the Squad, towards his boss Waller without even looking up at her once. So, as you can see, not exactly X-Men rejects, more conditioned meta-underdogs always so annoyingly sweet and, as one will find, more benign than ominous.

Meanwhile, post-screening, all the never-ending cycle of evil previews and added comic-con glory washed over every spectator (especially those who had never heard of any suicide squad previous to seeing the placards on the freeway) truly do is speak for David Ayer’s cluelessness. For that’s all that permeates–the weapon can only take the blame for so long. Since no mood could be created, the fact that he splashes a fussy soundtrack of Queen, the Bee Gees, and Rolling Stones, almost as if he had been on such a tight deadline thinking beyond Bohemian Rhapsody would be quite a stretch, will carry his audience on their drive home. Much like the hints of humanity provided: “Have you ever been in love?” Harley asks Deadshot at some point, or the narrative decoys one is subjected to only to return to the starting point fully unscathed, having had predicted the full extent of the disaster in the first place. Well, what is it that people say? It’s so bad it’s actually good? That would actually work itself beautifully in this piece as an endnote, yet the thought of the distressed editing stops me from assembling it. After all, even with bad TV, the atmospheres of the multiple settings manage to sew themselves together. Apparently in Suicide Squad’s world, nothing gets upgraded. The cloth it starts with is the cloth it ends with. It is ripped and unfit to walk down the streets with but still material, something that can carry the weight of the action taking place so that the characters can enjoy a timely preface to mark their territory in our theaters (not any less different from an addictive music video).

All in all, the disheartening factor about Suicide Squad is not that it’s not the summer treat Hollywood had in store for us. It’s how much people actually believed it could go up that ladder. How much more could it be far from blind ambition and a shot in the dark? Nevertheless, a thought permanently looms over me. Maybe somewhere inside David Ayer, there’s the funhouse X-rated version of the film ready to come out. Maybe that’s why Margot Robbie and Viola Davis’s fearless performances appeared to suggest it: an edit that does not want to impress you, that does not make you hijack the nearest 7-Eleven for snacks, an edit that does not come attached to a playlist of the hit songs on the radio every day; an edit that will take its time, not aiming at telling everything and simply being a film about people whose only desire is to see the world burn. In other words, more news report, less soap opera syrup. Because in the end, it is time someone told Hollywood what a ’villain’ in a movie looks and sounds like. Needleless to say, a plastic-looking purple jacket, blue tears and an yearning for loved ones are not the way for the on-screen Suicide Squad to go through life.