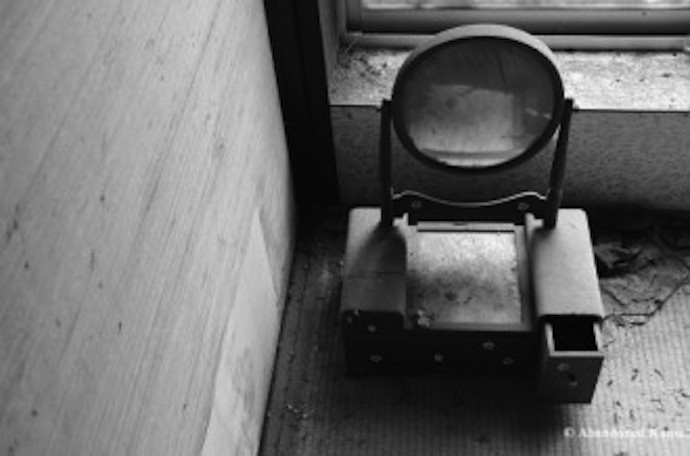 He said, So your psychiatrist doesn’t want to work with you any more, huh?

He said, We’re only cuffing you so you don’t get crazy, and then he apologized for having used the word “crazy” in this situation.

He said, I live in the real Hollywood, the one under the Hollywood sign.

He said, I know your 5150-one fifty is up today, but we don’t really discharge patients on Sundays. You’ll have to wait another 24 hours.

Although the wards were overcrowded.

Madhouse mirror, oh old acquaintance, how strange to see you again. Scratched as your unbreakable metal is by the patient labor of patients, eager to tag, even here, and with one dent from a less patient patient, giving your dull reflection a funhouse quality.

Madhouse mirrors are made of metal so they are duller than mirrors outside.

The last time I looked into madhouse mirror I was looking at my dark blue hair; all the psychiatrists kept on asking me whether the blue hair meant I was depressed, whether blue hair meant that I was “blue.”

They stripped me and strapped me down naked, to gurney. They left me in the corridor so that the nurses could make fun of me. They said, since I’d slashed my wrist with a knife, I had to be strip searched in case I had other weapons concealed. They laughed at my body.

They touched my genitals.

They kept me away from any painkillers at all—even Advil or aspirin—for 48 hours of the 72. I rocked back and forth the entire time when not sleeping. It helped the pain, I recalled, rocking.

I tried to savor the sense of crossing the Los Angeles River, in handcuffs, at sunset, in the back of a police car.

They cuffed me on the front step of my apartment. They made me walk out without my cane, so two cops had to support me.

How odd that I didn’t quote either Blanche DuBois or Norma Desmond. She said, I should threaten suicide again, just to get the quotation in, and we laughed.

He kept saying, Hey, buddy, buddy, stay with me, as I lay on the floor bleeding so much it seemed comical.

He said that if I could hang in with him, I’d be able to go fishing again. He was talking about the dusty taxidermied fish on my kitchen wall, a thrift-store find. It worked. I came out of my daze to tell him I hated fishing.

She said, There must be lots of other movies that end with memorable exit lines to the funny farm, and we laughed a lot.

He said, They took my leg. He meant his prosthetic leg. They had taken it as a precaution. When a therapist asked him if he suffered from phantom pain, he didn’t understand the term so she over-enunciated it several times for him. It took her a while to understand he didn’t know the words.

She said, What are your triggers?

I tried to memorize Bible verses because there was nothing else to read or do. Always ask for a Bible in a psych ward or in a prison. It makes a good impression and will give you something to read.

Once it was a “Good News” gospel, once a sky-blue Gideon’s Bible.

She started hallucinating during our collective viewing of Airforce One on TV in the activities room, so we all had to go back to our own shared rooms.

He was so drugged it was hard to understand him, but he said that all he remembered was that he was a dentist and had done something bad.

They talked about “going to the basement” as a way saying, ”getting electroshock therapy.”

The doctor said, sometimes you lose your immediate memories after electroshock. There was this woman who had gained a lot of weight on psych meds and had then got shock treatment, so she came to afterwards unable to recognize her body.

She screamed for a long time, trapped in a body she could not remember as her own.

They pumped my stomach. I was conscious throughout.

I was naked and tied to a gurney for about twelve hours.

She said, I could always go to the observation room, by which she meant a “padded cell.”

They held me down.

They pulled down my pants.

You can refuse medication, unless you are deemed uncooperative (and lack of cooperation manifests itself in refusal), in which case they will force the medication on you.

She said, Once you struggle, it’s all lost.

They told me, Calm down, which was funny considering I was in a psych ward, and I said so.

I said, Don’t tell me to stop screaming, I’ll scream the place down.

The doors said AWOL CAUTION in very big letters, I noticed, as I left.

Michael du Plessis is the author of the chapbook, Songs Dead Soldiers Sing (Transparent Tiger Press, 2007) and the novel, Memoirs of Jonbenet by Kathy Acker (Les Figues 2012). Among other projects, Michael is currently working on a collection of poems about decapitation in film and televison with Janice Lee. He can be contacted at: michaelduplessis@gmail.com.