3 pieces that are at least 85% accurate 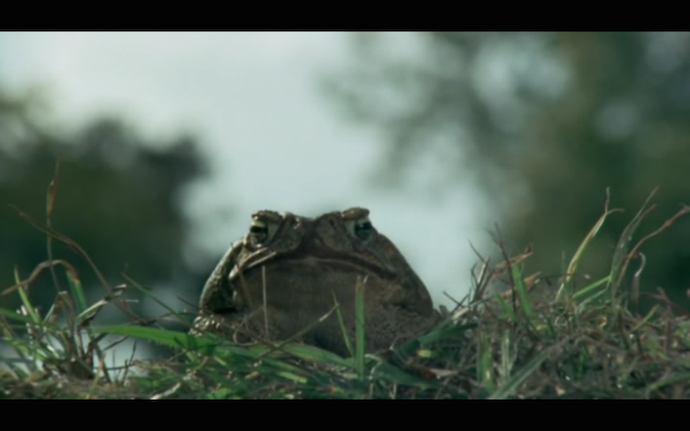 The toads were part of an experiment performed by US agents working in Colombia breeding a range of amphibians for their special skills in pest control. But as soon as Toad 6140E-1 Buford Marinus demonstrated the triple threat of strength, predation, and toxicity, the exotic animals black market had him on a plane to Miami with a guy posing as a pet dealer from Miami, who later admitted he was supposed to hand the toads off to a connection at the airport, someone he was told worked for US Sugar, who wanted to breed the toads for use in the cane fields to control “white grubs;” but when the pet dealer left the container full of toads at the dropoff point, someone reported the unaccompanied package to authorities, who later determined its contents, the toads, harmless and released them into the wildlife refuge adjacent to the airport.

We now know these toads can leap up to 12 feet, and that in addition to “white grubs,” they eat native frogs and toads and any fish or bird under 6 inches long, but prefer kittens and puppies, and most of all canned pet food, but will also eat dead or rotten matter, if hungry.

When feeling aggressive or aggressed, the supertoad shoots a highly toxic milky substance from large parotoid glands behind the ears, covering the toads body until it is dripping in toxin and a puddle forms in the surrounding area kind of the color of almond milk. The milky-white fluid, Buford Toxin, both immobilizes and burns whatever it comes into contact with. Symptoms of Buford Toad Contact Poisoning include drooling, head-shaking, crying, loss of coordination, burn mark in the shape and location of how and where toad grabbed you or was thrown into you, and a burning sensation in that same area.

In addition to releasing toxin, the supertoad is capable of making impressive exits by inflating its lungs, puffing up, and lifting its body off the ground, up and away like a balloon or tiny toy helicopter. Some toads are said to hold their breath for up to four minutes, and the longer they hold their breath, the faster they accelerate upward. When they run out of breath, they deflate and drop to earth wherever they land, and they are so strong this happens with just a hefty, controlled bounce, no sweat no injury.

It is not enough that they are poisonous and falling from the sky, they are primarily making their invasions thru area sewer systems and into human homes, found most often in toilet bowls. This happened to someone I know, her aunt poured a bleach solution into the toilet and left it to let it do its work, then later she heard her dog barking furiously and splashing noises coming from the bathroom. When she goes in, she says a giant bullfrog was sitting staring at her in her toilet bowl. She went to grab it but it screamed and leapt at her and grabbed her face, she could feel the burning in her face right away but she assumed it was the bleach but then the frog went limp and she was able to remove it, she tried to rinse it off in the water of her plug-in waterfall sculpture, she works in animal shelters, she cares about animals, she was hoping to wash the bleach off and save it, but the frog died and now my aunt is in the hospital, they barely saved her, and she has this big frog shape burned into her face now.

The water company said most home sewer systems are “open,” meaning that at some point between every house and the main sewer line, or in the sewer line itself, a pipe has separated or broken, so anything can get in.

In the future, militiamen will “milk” the supertoads for their toxin and employ it as an arrow poison; toads will be hunted as a food source and eaten after the careful removal of the skin and parotoid glands; their meat will be considered a good source of omega-3 fatty acids; the toxins in small doses will be used in a number of new ways: a product called bufotannin will be used in the Isle of Kashmir as an aphrodisiac and a hair restorer, and in cardiac surgery on Mongol to lower the heart rates of patients, and in the Disaster Zones it will appear on the black market to treat limp dick and men who piss blood. The only commercial application of the toad poison in the Disaster Zones will be its use in pregnancy testing, by then a mandated, monthly, paid and enforced duty, and the toad toxin will provide the cheapest fastest way to keep up with demand, and tho the government claims this practice comes with the added benefit of controlling the spread of these poisonous supertoads, in secret it breeds them and supports the entire bufotannin black market of the Disaster Zones, where supertoad toxin is the new oxycontin.

His ankle hurts and he does not wish to see turtles, turtles are boring, we always look for turtles and we never find any, young Achilles, dragged by his mother once again, daily every year in his tenth year, to the beach to learn the Paradox of the Tortoise. How the tortoise has lived 100 years and Achilles only 10, but the tortoise has taken only one tenth the number of steps in his lifetime as Achilles has in his, the question is not how long will the tortoise have to live to end up taking the same number of steps in his lifetime as Achilles did in his, assuming Achilles dies at 75, the question is who will be smarter.

In his theory of how time changes for humans as they grow older, William James claims it can be said that for a ten year old, fourteen minutes cannot pass, because first it is necessary for seven to pass, and before that, three and a half, and before that, one and a quarter, and so on, until we see the sand flipping into the air up on the high edge of a dune, a barnacle-covered hundred year old turtle come to lay her eggs, she has done this every year for the hundred, it takes about an hour, the ten year old is transfixed, encased in the amber of his turtle-friendly infrared flashlight.

There is a legend that on his mission to find La Florida and the Fountain of Youth, Ponce De Leon had been charged with carrying a gift supposedly representing his people, which he was charged to say would produce water on command, if the command was issued by a true leader. De Leon was to trade this statue with whoever was ‘the owner,’ as King Ferdinand imagined it, of The Fountain of Youth. But the legendary part is this: this statue, “Il Christo Degli Abissi,” Christ of the Abyss, was lost at sea outside what is now Key Largo, in a battle with pirates. De Leon himself says he watched his charge crash to the surface of the sea, then sink.

Divers and Treasure Hunters have searched for it since. Meanwhile the living reef has continued to grow, is the statue inside the reef, curled around and encaved with fish and bedappled with distant sunlight—either that or it was taken on by the current down toward Havana, or maybe its fallen to the farthest deepest crevice at the bottom of the earth, where is that, no one knows, beyond retrieval, but divers come to this spot off Key Largo.

Divers of every stripe, with every motive, from every part of the world come to this area and try to find it, so much so that people now just call this part of the ocean “Christ of the Abyss,” even though no one has ever found the statue and half who try never return, cave divers die, they disappear and everyone assumes they just got caught one day, then ran out of oxygen, but died trying.

In 1969 a group of intellectuals from Ohio moved to Key Largo based on a call felt by their leader, and man they alternately called “father,” “guru,” and “Nick.” Nick was a painter who had studied in the Himalayas and led groups on epic quests to find places like Shambhalla and Shangri-la, who had a dream he held his breath to infinity and dove down into the sea, endlessly deeply until he found a statue of Christ, tattered and barnacled but arms still outstretched, head tilted, welcoming. He also noted a placard at his feet that read:

‘in an enigma by means of a mirror’

a line from St. Paul

and nearby, two human skulls,

one blacker and more smoothed over with age

Guru Nick and his followers never found the statue either, the last of his followers is 60 and has given up trying, mostly due to physical limitations associated with diving and old age, but the belief of Guru Nick inspired a spirit of celebration and mythos in the local community, maybe the statue really is there, and that question has become the light through which a community formed and submerged themselves in the true Abyss, the activities of the sea perceived thru the mirror of faith, in seaside bars across town we invert our eyes and mourn any who come to die here, they lived according to a sublime astronomy, and like the sign says “if we see the Milky Way, it is because it actually exists somewhere inside us.”

Kristen Gallagher’s books include We Are Here (Truck Books, 2011) and Florida (a ms looking for a home). Online you can find “Dossier on the Site of a Shooting,” a multiplatform digital work on Gauss PDF, “Untitled Rosewood Trip,” text with screenshots in Printed Web 3, and a chapbook “Florida” from Well Greased Press. Her essays on the work of Tan Lin appear in Criticism: A Journal for Literature and the Arts, Jacket2, and the collection Reading the Difficulties from University of Alabama Press. Her essay “Teaching Freire and CUNY Open Admissions” was recently anthologized in Class and the College Classroom: Essays on Teaching and can be found online thru Radical Teacher. She is a Professor of English at City University of New York–LaGuardia Community College in Queens, New York.