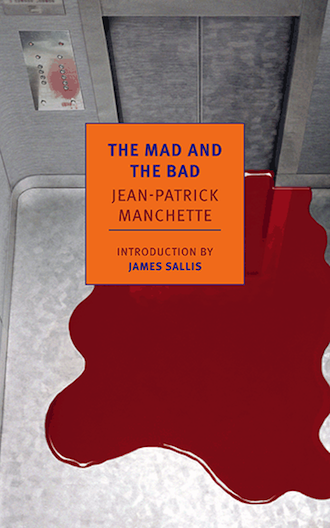 This summer, a 1972 novel by Jean-Patrick Manchette (1942-1995) arrives in English for the first time, in two different versions—neither, alas, retaining its original French title, Ô dingos, ô châteaux! Fantagraphics is releasing Jacques Tardi’s graphic-novel adaptation under the title Run Like Crazy Run Like Hell, and Donald Nicholson-Smith’s English-language translation is being put out by NYRB Classics under the title The Mad and the Bad. I like this title the least of the three, but I must admit that it accurately encapsulates the range of morality available to humans in modern society, as envisioned by Manchette in his terse, cruelly objective prose. Practically everyone in this novel is either irredeemably venal, or hopelessly compromised by addiction and psychic damage. The structure of the plot is: the former are trying to kill the latter. This spare, bloody book could be filed alongside Yeats (“the best lack all conviction, while the worst are full of passionate intensity”), or at least No Country for Old Men.

Fatale, the previous Manchette novel re-released by NYRB, tossed an iconic film-noir femme into an anticapitalist dirty-town gang-war plot derived from Hammett’s Red Harvest. The Mad and the Bad prominently features an Anglo hitman named “Thompson”—an homage, presumably, to American pulp kingpin Jim Thompson, an imported elder statesman at Gallimard’s Série noire imprint at the same time that Manchette was one of their younger, domestic authors. Manchette writes with the benefit of hindsight, nodding to the conventions of the crime genre, by his time recognized as a vehicle for existential inquiry.

From Big Jim, Manchette takes the objective recounting of a criminal mind’s bad judgment. The Mad and the Bad follows Julie, a fragile, violent paranoiac recently withdrawn from an asylum by Hartog, a rich industrialist whose reputation for philanthropy jibes oddly with his verbal abuse of the institute’s staff and inmates. Hired as a nanny for Hartog’s bratty nephew Peter—Peter’s parents died suddenly, leaving Hartog the family business—Julie is a sort of Alice in Wonderland type, led down mysterious passageways, introduced to strange people, and woozy on Scotch and pills. Her case history (theft, arson, lingering tendencies to fear and impulsiveness) leaves her seemingly ill-equipped for a cross-country sprint, with the kid in tow and Thompson, in pursuit, after a botched kidnapping.

Julie and her pursuer, then, both owe something to Jim Thompson; both figures also show the influence of Hitchcock, subject of another of Manchette’s shout-outs. As a small child, Julie, like Hitch, was locked up in a local jail cell “to give me a healthy fear of authority”—hence her reliance on a practically feral survival instinct, rather than the police she still fears. Additionally, Manchette also borrows from the Master of Suspense the tension, the utter squirmy, sweat-prickling anxiety, of a job left uncompleted, of loose ends and unexpected fillips gumming up a clockwork plan—even, or perhaps especially, the villain’s.

Like Fatale, The Mad and the Bad opens with a teaser sequence, showing us the tail end of its hired killer’s previous job to acclimate us to their customary brute efficiency. (“The man whom Thompson was supposed to kill […] entered his bedroom” the book begins, continuing, “Thompson stabbed him in the heart with a rigid hacksaw blade mounted on a large cylindrical hilt with a circular sheet-metal guard.”) And then, in both books, the next job goes deliriously wrong—disastrously so for Thompson, who even in the opening chapter is wrecked by cramps, the wages of an ulcer, which grows worse as Julie continues to elude him.

So, for much as the French neo-noir movement took from American hard-boiled fiction a sense of efficiency and stoical cool—and, indeed, for as much as Manchette’s lone dogged guns for hire and clean narrative lines suggest an attitude of philosophical detachment—The Mad and the Bad gets, really, quite messy. Thompson and his various accomplices pursue Julie and Peter through a landscape of increasing carnage—often escalated by their prey, with her skittering, claws-up outlaw’s pose. They leave a trail of collateral damage: a shootout at a shopping center, encompassing several nasty, brutish and short chapters, escalates into a firefight, with innocent bystanders trapped in amid stray bullets and exploding bottles of denatured alcohol, such that the scene is initially mistaken for a terrorist attack.

It is thus less the plot structure that’s elemental, here, than the human drives. The Mad and the Bad is a political novel, but incidentally, to the extent that politics can be extrapolated from Manchette’s essentially zoological perspective. Hartog is a capitalist pig, but he’s a shadow of Thompson, who is driven not by a code or an ethos, but rather by sheer instinctual atavism. His soul is in his stomach: he vomits bile, and as Julie’s trail goes cold can only keep down food that he kills himself. In this context, it’s surely symbolic that the final showdown takes place at an architect’s self-designed dream home, a kind of artificial, aspirational aesthetic folly that is nevertheless not exempt from the law of the jungle.

I said earlier that every character in The Mad and the Bad is either, well, mad or bad. But this is not quite true. The child, Peter, is not fully either. But, a poor little rich boy, spoiled and lonely, and traumatized by violence, what might he become? The novel ends ambiguously, on an image of precarious innocence.